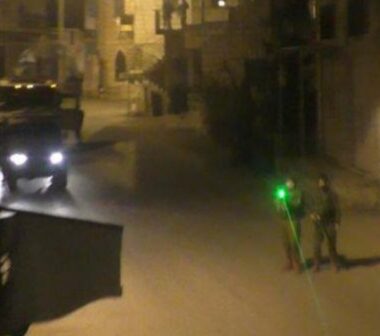 Israeli soldiers abducted, earlier Monday, at least six Palestinians from their homes in several parts of the occupied West Bank.

In the Ramallah governorate, in the central West Bank, the soldiers invaded Ni’lin town, west of the city, searched homes, and abducted a former political prisoner, identified as Barakat Fayez al-Khawaja.

The soldiers also invaded Kharbatha al-Misbah village, west of the Ramallah, and abducted Riyad Zohdi Darrraj from his home.

In addition, Palestinian journalist Bilal Tamimi stated that the soldiers installed a roadblock at the main road leading to Nabi Saleh village, northwest of Ramallah, causing an extended traffic jam.

The soldiers also interrogated dozens of Palestinains while inspecting their ID cards.

In Jenin, in the northern part of the West Bank, undercover Israeli soldiers kidnapped two young men, identified as Ekrama Ahmad Kanaan and Qussai Salah Khaliliyya, from their homes.

In Hebron, in the southern part of the West Bank, the soldiers abducted Assem Elias Abu Aisha from the city, in addition, Zayed Ismael al-Awawda from the al-Borj village, south of the city, after storming their homes and ransacking them.

The soldiers also installed roadblocks in Joret Bahlas and al-Fahs areas, in the northern and southern parts of Hebron city, in addition to the main entrances of Sa’ir and Halhoul towns, northeast and north of Hebron, and the al-Fawwar refugee camp, southwest of the city, before stopping and searching dozens of cars and interrogated many Palestinians while inspecting their ID cards.