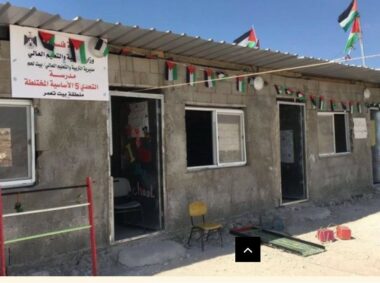 Hasan Breijiyya, the head of the Bethlehem office of the Wall & Colonization Resistance Commission, stated that the soldiers accompanied by members of the Israeli state-funded Regavim pro colonies group invaded the area, and handed the demolition orders to the two schools, for “being built without permits” from the so-called Civil Administration Office, the administrative branch of the illegal Israeli occupation.

Breijiyya added that the demolition orders target Kisan School and Tahadi 5 School, and said that the Tahadi school was previously demolished and rebuilt five times, while Kisan School received an order earlier this month, halting construction and expansion.

It is worth mentioning that the children in the two schools are also subject to frequent Israeli violations and attacks by both the soldiers and the illegal Israeli colonizers.

The so-called Regavim was established to monitor what it deems “illegal Palestinian constructions” in the occupied West Bank.

“Article 49 of the Fourth Geneva Convention states: “The Occupying Power shall not deport or transfer parts of its own civilian population into the territory it occupies.” It also prohibits the “individual or mass forcible transfers, as well as deportations of protected persons from occupied territory.

“As the occupier, Israel is therefore forbidden from using state land and natural resources for purposes other than military or security needs or for the benefit of the local population. The unlawful appropriation of property by an occupying power amount to “pillage”, which is prohibited by both the Hague Regulations and Fourth Geneva Convention and is a war crime under the Rome Statute of the International Criminal Court and many national laws.” Amnesty Report.

Related Repot From Haaretz:
Did Israeli Settler Group Use Government Funds to Spy on Human-rights NGOs?