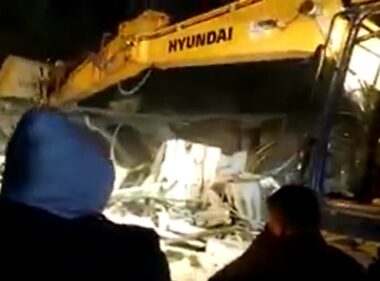 On Sunday, the Israeli District Court in occupied Jerusalem denied an appeal filed by the Salhiyya Palestinian family to rebuild their historic home that was demolished by the army several days ago.

Walid Abu Taha, the attorney who represents the Salhiyya family in Sheikh Jarrah neighborhood in Jerusalem, said Israel is trying to confiscate the land where the home once stood to build an illegal colony.

Abu Taha added that, in its ruling, the court said it is denying the appeal because the demolition has already been carried out.

The lawyer also said that he intends to file an appeal with the Israeli High Court because the Salhiyya family never received a demolition order for its home, and therefore, should be allowed to return to its land and rebuild the property.

It is worth mentioning that the soldiers demolished two homes owned by the Salhiyya family, including a historic home that predated Israel itself as it was built before the year 1948.

The homes were demolished on Wednesday at dawn, and the soldiers also abducted 27 Palestinians, including six members of the Salhiyya family.

The demolitions of the homes aim at creating a link between the illegal Israeli colonies in the area, including the French Hill, in addition to the current construction of colonialist units in the area.

Sheikh Jarrah remains the target of dangerously escalating Israeli policies aiming at demolishing homes and removing at least 75 Palestinian families from their homes in the neighborhood, to replace them with illegal colonialist settlers.