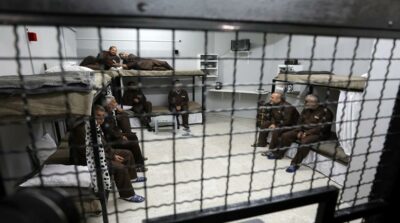 At the beginning of this year, some five hundred Palestinian administrative detainees started refusing to show up for their court sessions. The boycott includes the hearings to approve or renew the administrative detention order, as well as appeal hearings and later sessions at the Supreme Court.

They also noted that Israel’s use of the policy has expanded in recent years to include women, children, and elderly people.

Administrative detention is an Israeli policy that allows the indefinite detention of prisoners without trial or charge based on “secret evidence” that neither the detainee nor his lawyer is allowed to see. At least four Palestinian children are detained under such orders.

Human rights groups describe Israel’s use of the practice as “systematic and arbitrary”, and as a form of collective punishment, noting that its extensive use constitutes a violation of international law “particularly relating to internationally recognized principles of a fair trial.”

The widely condemned policy of administrative detention allows the detention of Palestinians without charge or trial for renewable periods ranging between three and six months based on undisclosed evidence that even a detainee’s lawyer is not allowed to review.