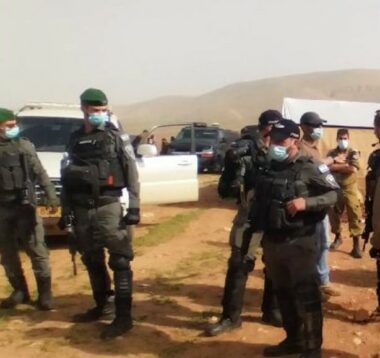 Several Israeli military vehicles invaded, Monday, Khirbat Ibziq village, and searched homes, in addition to installing a roadblock near Atouf village, in the northern plains of the occupied West Bank.

Mo’taz Bisharat, a Palestinian official who monitors Israel’s colonialist activities in Tubas and the Northern Plains, said the soldiers invaded the village before photographing several structures.

He added that the soldiers also searched structures before withdrawing from the village.

In addition, the soldiers installed a roadblock, east of Atouf village, before stopping many cars heading to the Northern Plains and the al-Boqei’a Meadow area.

In related news, the soldiers invaded the western area of Deir Istiya town, north of Salfit in the central West Bank, stormed homes and stores, and confiscated surveillance recordings.

On Monday at dawn, the soldiers abducted at least fourteen Palestinians, including one woman, a former political prisoner, and siblings, and injured two, after the army invaded and violently searched dozens of homes across the occupied West Bank.