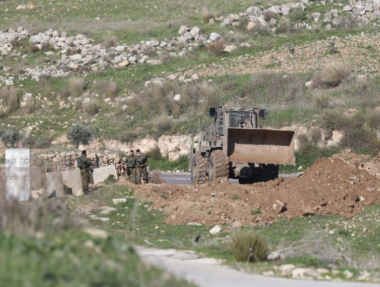 Israeli soldiers placed, Sunday, sandhills on the three entrances of Deir Nitham village, northwest of the central West Bank city of Ramallah, and prevented the Palestinians from entering or leaving it.

Media sources said the soldiers surrounded the village before installing the sandhills and attacked Palestinian protesters.

They added that the army first isolated the village with sandhills two days ago, before the Palestinians removed the sand barriers, and the army returned, Saturday, and placed new sandhills to isolate the village.

It is worth mentioning that the village has been subject to frequent Israeli military invasions, especially since Wednesday, leading to protests.

A few days ago, Israeli colonialist settlers attacked many Palestinian cars and residents near its main road, close to Halamish colony, which was installed on stolen Palestinian lands.

On Sunday evening, the soldiers abducted Mohammad Jamahna, from Jenin refugee camp, in the northern West Bank city of Jenin, after stopping him at the Za’tara military roadblock, south of Nablus.

In occupied Jerusalem, the soldiers abducted a young woman, identified as Shorouq Rassem Abul-Wahed, in the Al-Aqsa Mosque, for filming them when they accompanied dozens of colonialist settlers into the courtyards of the holy site.

They also issued an order barring, Mokhtar Tamimi, one of the guards of Al-Aqsa from entering the holy compound for one week.

In related news, the soldiers abducted, overnight and on Sunday at dawn, twenty-two Palestinians from their homes, in several parts of the occupied West Bank, including six who were taken prisoner after illegal colonialist settlers and soldiers invaded the courtyards of the Al-Aqsa Mosque in occupied Jerusalem.