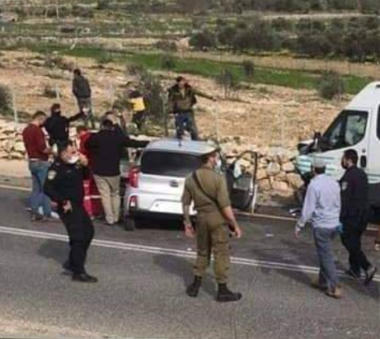 On Sunday, a group of Israeli colonialist settlers, illegally squatting on Palestinian lands, attacked many Palestinians in the Wadi Qana Natural Reservation area, northeast of Salfit, in central West Bank, and injured seven.

Sa’id Zeidan, the mayor of Deir Istiya town near Salfit, said the colonists came from the illegal Maale Shomron outpost, which was installed on stolen Palestinian lands.

He added that the assailants hurled stones at the Palestinians, in addition to physically assaulting them and using pepper spray.

Medical sources have confirmed that seven Palestinians were injured and received the needed treatment.

Zeidan said the colonists were accompanied by many soldiers in their invasion into the area, however, the Palestinians managed to stop them from entering their lands.

The colonists also hurled stones at the Palestinians and shattered the windshields of five Palestinian cars.