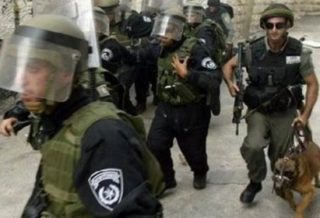 It added that the army also invaded the Deheishe refugee camp, south of Bethlehem, and kidnapped a former political prisoner, identified as Ghassan Zawahra, in his thirties, after searching his home, and several other homes.

Clashes took place in between the invading soldiers and many local youths, who hurled stones on the military jeeps, while the soldiers fired gas bombs and concussion grenades.

Furthermore, the soldiers invaded the al-Khader town, west of Bethlehem, and kidnapped one Palestinian, identified as Hussein Ali, after searching his home.

The Jerusalem office of the Palestinian Prisoners Society said the soldiers kidnapped a child, identified as Mohammad Samer Mahmoud, 14, from his family’s home in the al-‘Eesawiyya town, in the center of occupied Jerusalem.

In addition, the army kidnapped five Palestinians in the northern West Bank district of Nablus, after the soldiers invaded a number of homes and searched them.

Also at dawn, the soldiers kidnapped one Palestinian near the southern West Bank city of Hebron, searched a store and many homes in Hebron city, in addition to the towns of Yatta and Doura.

On Tuesday evening, the soldiers kidnapped two students of the Najah National University in Nablus.

They have been identified as Abdul-Hafith Shehada from Orif village, who was taken prisoner at the Huwwara roadblock, south of Nablus, and As’ad Tawil from Far’ata village.

Furthermore, the soldiers kidnapped a Palestinian woman, identified as Samaher Abdul-Qader Masalma, from Beit Awwa town, west of Hebron, while visiting her imprisoned husband Yousef Masalma in the Negev Prison.