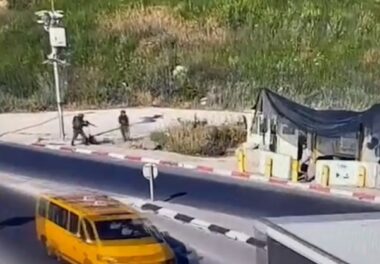 Israeli soldiers shot and seriously injured, Wednesday, a Palestinian man, reportedly when he attempted to stab them at the Huwwara military roadblock, south of the northern West Bank city of Nablus.

The Palestinian, identified as Mohammad Ismael Abu Sabra, 49, was shot by the soldiers near the roadblock before the soldiers sealed the area.

A Palestinian ambulance rushed to the scene, but the soldiers refused to allow the medics through and kept the Palestinian bleeding on the ground until an Israeli ambulance arrived at the scene much later and took him away.

The Israeli army alleged that Abu Sabra “carried a knife and charged at the soldiers before they shot him in the upper body.”

The army added that the alleged attempted attack did not lead to injuries among the soldiers.

In related news, the soldiers invaded several areas in Nablus, including the Old City and the al-Basha street, stormed and ransacked homes, and abducted Allam Ibrahim Ra’ey.