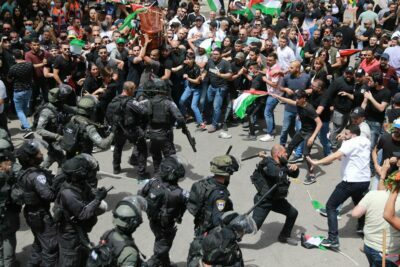 JERUSALEM, Monday, May 16, 2022 (WAFA) – A Jerusalem hospital is considering the possibility of prosecuting Israeli police over the recent attack on the funeral procession of slain veteran journalist, Shireen Abu Akleh.

The management of St Joseph hospital said in a press conference that they were considering the possibility of suing Israeli police over their Friday’s incursion into the hospital and attacking the funeral of iconic Al Jazeera reporter Shireen Abu Akleh, who was killed by Israeli military gunshot to the head on the morning of Friday, May 11, 2022, while reporting from Jenin.

It added that it has contacted a law firm to examine the possibility of initiating a complaint against the Israeli occupation authorities over police violence.

Another video footage showed police firing a smoke grenade in the direction of the hospital before muscling inside.

During the conference, the nuns working at the hospital recounts how a mother in labor was ushered into the hospital by her husband through tear gas and escaping gunfire.

The hospital management affirmed that the police attack is a gross violation of humanitarian laws and unjustifiable and that it was only the police who committed and resorted to violence during Abu Akleh’s funeral procession.

“I have been serving as the director of this hospital for 31 years, during which I have never seen violence similar to police violence on that day,” he said while pointing that police violence was unjustifiable.