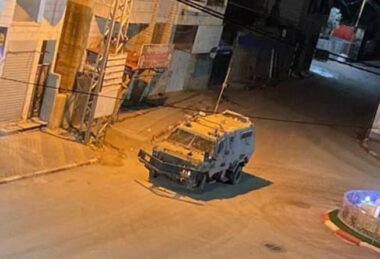 Medical sources said the soldiers shot a young man with a rubber-coated steel bullet in the head, causing a mild injury.

The soldiers also invaded and ransacked many homes and abducted Mohannad Turkman and Adam Abu Ar-Rob.

During the searches of homes, the soldiers summoned six Palestinians, including siblings, for interrogation at the Salem military base.

Also at dawn, the soldiers invaded the Deheishe refugee camp south of Bethlehem in the occupied West Bank and abducted a young man from his home, leading to protests before shooting and seriously wounding a child.