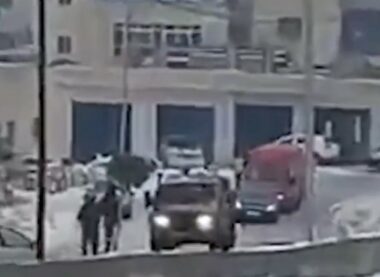 They added that the soldiers shot a young man with a live round on the main road between Deir Jarir and the adjacent Kafr Malek village.

The wounded young man was rushed to a Palestinian hospital in Ramallah; his wounds were described as moderate.

In related news, the soldiers detained a Palestinian shepherd, identified as Mohammad Daraghma, for three hours, while herding his sheep in the Ein al-Hilwa area, in the Northern Plains of the West Bank.

On Thursday evening, the soldiers injured, dozens of Palestinians and abducted two, in several parts of the occupied Palestinian capital, Jerusalem, in the West Bank.

On Wednesday at night, the soldiers and police officers invaded a coffee shop in the at-Tour neighborhood, in Jerusalem, and abducted at least thirty young men, in addition to summoning the owner for interrogation.