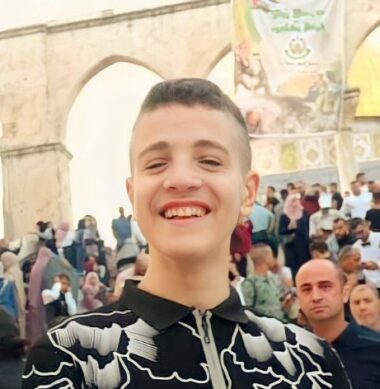 The Israeli army reported Saturday that one of its soldiers shot a Palestinian who reportedly stabbed an Israeli colonizer near the Givat Hamivtar illegal colony’s light rail station, near Shu’fat, northeast of occupied Jerusalem, in the West Bank.

Israeli media sources said a 20-year-old man was seriously injured in the reported stabbing incident, and that the police and the Israeli army launched a massive search campaign for the attacker.

The sources claimed that the attacker was a Palestinian teenage boy who ran towards a soccer field near Shu’fat before an officer shot him.

Israeli Ynet News said the conscious and bleeding colonizer told the medical team treating him that the “attacker had an Arab appearance” before the soldiers launched the manhunt and shot the Palestinian teen.

Palestinian sources said the wounded teen had been identified as Mohammad Rajab Abu Qteish, 16, from Anata town, northeast of Jerusalem.

Mohammad ran towards a soccer field where Palestinian teens had been training before the soldiers invaded the area and shot him. The soldiers then prevented the medics, who had been stationed at the soccer game for cases of emergency, from approaching him.

The medics rushed toward the wounded teen, but the soldiers and police officers threatened to shoot them before some officers assaulted the medics while forcing them to leave the area.

In addition, dozens of soldiers invaded Mohammad’s home in Anata town, northeast of Jerusalem, and ransacked the property before abducting his father, Rajab, and one of his brothers.

Many Palestinians protested the invasion, and the Israeli soldiers fired many rubber-coated steel bullets, wounding a young man, and fired many gas bombs and concussion grenades.