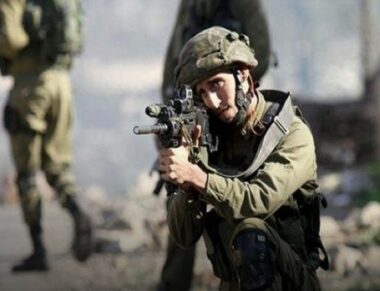 Israeli soldiers shot a young Palestinian man, Thursday, and caused dozens to suffer the effects of tear gas inhalation near the illegal Annexation Wall west of Tulkarem, in the northern part of the occupied West Bank.

Media sources said the soldiers fired many live rounds and gas bombs at Palestinians on their lands near the illegal Annexation Wall, leading to protests.

They added that the soldiers shot a young man with a live round, causing a moderate injury, before the Palestinian medics rushed him to a hospital.

The medics also provided treatment to many Palestinians who suffered the effects of tear gas inhalation.

The incident took place after dozens of soldiers invaded the area and deployed many armored vehicles near various sections of the Annexation Wall.

The soldiers also closed the gates of the Wall in the area and prevented the workers from crossing.

In related news, the soldiers attacked a Palestinian farmer, Mafdi Rib’ey, causing cuts and bruises to several parts of his body, and confiscated a bulldozer owned by his brother Fadel, in Masafer Yatta, south of Hebron, in the southern part of the West Bank.

In related news, an illegal paramilitary Israeli colonizer fatally shot a Palestinian, Nidal Jom’a Ja’afra, 30, who reportedly stabbed another colonizer at a bus stop near the illegal colony of Efrat, built on stolen Palestinian lands, south of Bethlehem in the occupied West Bank.