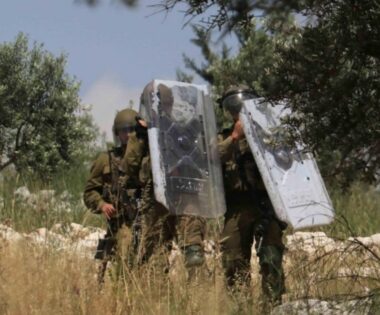 On Friday, Israeli soldiers shot two Palestinians with rubber-coated steel bullets and caused dozens, including several children, to sustain cuts and bruises and to suffer the effects of tear gas inhalation during the weekly procession in Kufur Qaddoum town, east of Qalqilia, in the northern part of the occupied West Bank.

Morad Eshteiwi, the media spokesperson of the Popular Committee in Kufur Qaddoum, said the Palestinians marched carrying Palestinian flags and chanting for the liberation of Palestine.

This week’s protests also marked the ethnic cleansing of Palestine during the Nakba of 1948, when Israel was established in the historic land of Palestine after depopulating and destroying hundreds of villages and towns.

The protesters also carried posters of the slain veteran Palestinian journalist Shirin Abu Aqla, who was killed by Israeli soldiers on May 10, after they targeted her and other journalists with sniper fire while the journalists were gathered to cover an Israeli invasion of Jenin refugee camp in the northern West Bank

Eshteiwy added that the soldiers fired many rubber-coated steel bullets, gas bombs, and concussion grenades at the protesters, shooting two and causing dozens to suffer the effects of tear gas inhalation.