Soldiers Storm Many Homes In Hebron And Bethlehem, Abduct One Palestinian 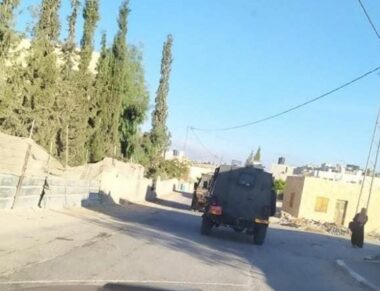 Israeli soldiers invaded and ransacked, on Wednesday at dawn, many Palestinian homes in Hebron and Bethlehem, in the occupied West Bank, and abducted a young man.

Media sources in Hebron, in the southern part of the West Bank, said many army jeeps invaded Beit Ummar town, north of the city, before breaking into and ransacking many homes in ‘Aseeda and Khlalet al-Ein areas.

They added that the soldiers smashed the doors of many homes before breaking into them, and violently searched them causing extensive property damage.

During the invasions, the soldiers abducted Moath Sa’id Awad, 21, and summoned a former political prisoner, identified as Mahdi Mirshed Za’aqeeq, for interrogation in Etzion military base and security center, north of Hebron.

In addition, several military vehicles invaded Bethlehem city, south of occupied Jerusalem, before the soldiers stormed and ransacked homes in the Wad Ma’ali area, and the Old City, leading to protests.

The invaded homes belong to members of the local al-Hreini family, including the home of a political prisoner, identified as Hamza Khaled al-Hreini.