Army Invades Printshop In Hebron, Orders It Shut Until February 2022 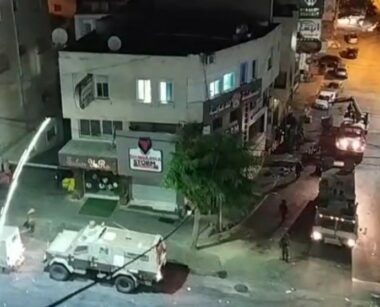 Dozens of Israeli soldiers invaded, on Wednesday at dawn, a Printshop in Hebron city, in the southern part of the occupied West Bank, confiscated its machines and equipment, in addition to ordering it shut until February of 2022.

Eyewitnesses said dozens of soldiers invaded the Ein Sarah area, in Hebron, before breaking into the Palestinian Advertisement Company, owned by Emad ath-Theeba, and confiscated more than 19 press machines, in addition to various official documents. They added that the soldiers weld the company’s front iron doors shut and placed an order shutting it down until February of next year, 2022.

The invasion led to protests before the soldiers fired many gas bombs and concussion grenades; there have been no immediate reports of injuries.

Also at dawn, the soldiers abducted four Palestinians, including two siblings who were also assaulted by the army, in Tubas, Qalqilia, and Ramallah, in the occupied West Bank.

Furthermore, the soldiers invaded and ransacked many Palestinian homes in Hebron and Bethlehem, in the occupied West Bank, and abducted a young man.