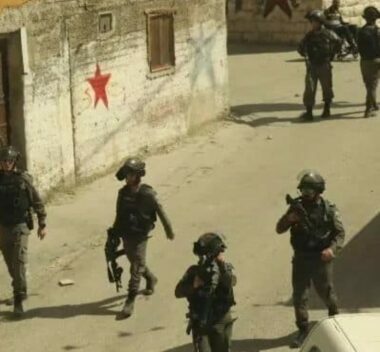 Israeli soldiers abducted, on Wednesday at dawn, seven Palestinians, including two siblings who were also assaulted by the army, in Tubas, Qalqilia, and Ramallah, in the occupied West Bank.

Kamal Bani Odah, the head of the Tubas office of the Palestinian Prisoners’ Society (PPS) in the northeastern West Bank, said the soldiers invaded the city and abducted Fayez Abu Dawwas, after storming his home and ransacking it.

In Qalqilia city, in northern West Bank, the soldiers invaded a home and ransacked it, before assaulting Mohammad Bilal Daoud, 29, and his brother Amir, 28, causing injuries, and abducted them.

During the invasion in Qalqilia, the soldiers deliberately rammed a car owned by the Qalqilia City Council and kept driving. (Video By Palestine TV)

Also at dawn, the soldiers invaded and ransacked many Palestinian homes in Hebron and Bethlehem, in the occupied West Bank, and abducted one a young man.