Israeli Soldiers Demolish A Barn, Abduct Its Owner, Near Tulkarem 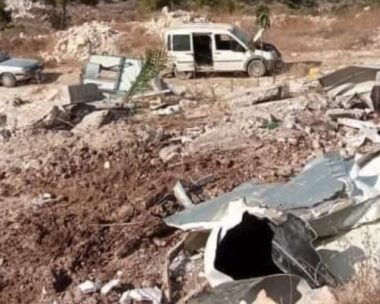 Israeli soldiers demolished, on Wednesday morning, a barn in Qaffin town, north of Tulkarem, in the northern part of the occupied West Bank.

Khaled Ajjouli, a resident of Qaffin, stated that several Israeli military jeeps and a bulldozer invaded the town before demolishing a barn and a water reservoir, owned by Nidal Abdul-Rahim Ajjouli, 40.

He added that the soldiers abducted Nidal, who was sleeping in his barn to guard his livestock and assaulted his cousin Rashwan Nasreddin Ajjouli who tried to help him in removing the livestock out of the barn before the soldiers demolished it.

The destruction was carried out without a warning, especially since the Palestinian never received a demolition order.

Khaled added that the attack is not the first, as the soldiers demolished, nearly 18 months ago, a concrete room allegedly for being built with a permit from the so-called Civil Administration Office, the administrative branch of Israel’s illegal occupation.

On Wednesday at dawn, dozens of Israeli soldiers invaded a Printshop in Hebron city, in the southern part of the occupied West Bank, confiscated its machines and equipment, in addition to ordering it shut until February of 2022.

Also at dawn, the soldiers abducted four Palestinians, including two siblings who were also assaulted by the army, in Tubas, Qalqilia, and Ramallah, in the occupied West Bank.

Furthermore, the soldiers invaded and ransacked many Palestinian homes in Hebron and Bethlehem, in the occupied West Bank, and abducted a young man.