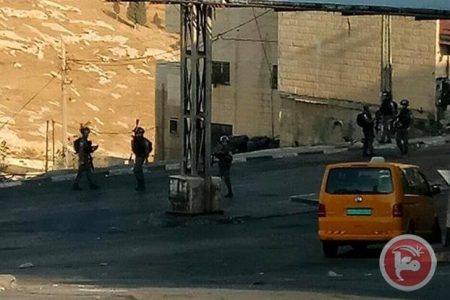 Israeli forces stormed the town of Abu Dis, in the occupied West Bank district of Jerusalem, on Sunday morning, and fired tear gas at university students and young schoolchildren at al-Quds University.

Hani Halabiya, a spokesman of the Popular Resistance Committees in the town, told Ma’an News Agency that several university students, as well as schoolchildren that were also at the campus, suffered from tear gas inhalation as soldiers “haphazardly” showered the area with tear gas.

An Israeli army spokesperson said that they were “looking into reports” of the raid.

Al-Quds University, along with other Palestinian universities, has been subjected to numerous Israeli military raids in the past. Six al-Quds University students were shot and injured with rubber-coated steel bullets during clashes there, in April.

The university was raided several times last year, when Israeli forces destroyed school’s property, injured scores of students during clashes, confiscated the school’s equipment and documents, and even staged a raid during a book fair for students in need, proceeding to destroy and confiscate all of the contents of the fair meant for struggling, low-income students.