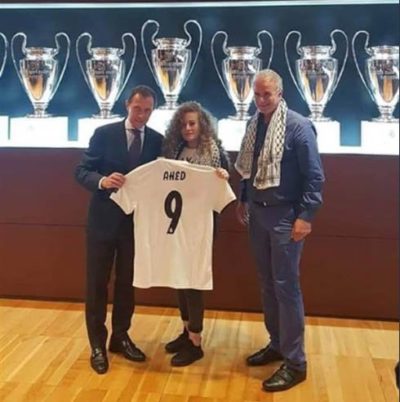 Ahed Tamimi, who was imprisoned for eight months this year for slapping an Israeli soldier after her cousin was shot in the head, was honored Sarurday by the Real Madrid football team in Spain.

Real Madrid is one of the most well-known football teams in the world, with many football fans internationally supporting either Real Madrid or its rival, Barcelona.

17-year old Ahed, and her father Bassem, were honored in Santiago Bernabeu stadium in the Spanish capital on Saturday. They were greeted by former striker Emilio Butragueno, who presented the teen with a personalised football jersey. The jersey had ‘Ahed’ printed across the back, and the number 9, which is commonly assigned to strikers who take the front lines of the field and score most of the goals.

The seventeen year old girl had traveled to Spain with her father, Bassem Tamimi, to help spread the word about the conditions in their hometown, Nabi Saleh.

An Nabi Saleh is a small village of approximately 550 people, twenty kilometres north west of Ramallah in the West Bank of the Occupied Palestinian Territories.

Israeli journalist Lisa Goldman has written for +972 Magazine that in Nabi Saleh, “the Tamimi family has been demonstrating every Friday for about a decade, protesting the takeover of Nabi Saleh’s natural water spring by nearby settlers. As Bassem Tamimi once explained to me, in quite fluent Hebrew, the villagers said nothing when the army built the settlement of Halamish (originally Neve Tzuf) on their land. But when the settlers confiscated their spring, and the army then prevented the Tamimis from accessing it, Bassem and his extended family decided to draw a red line.”

Her father, Bassem Tamimi, has been abducted by Israeli forces a dozen times for his role as a community organizer in Nabi Saleh. He has also been tortured and spent three years in prison without a conviction.

In 2015, he wrote, “The silence of the world is worse than what the occupier is doing. We can’t understand this silence, because our struggle is for humanity and the world is supposed to care about human rights.”

Bassem and his cousin Naji have been recognized as human rights defenders by the European Union. In 2012, Bassem was declared a prisoner of conscience by Amnesty International.

The cousins have helped coordinate their village’s unarmed resistance activities. In so doing, they have defied Israeli Military Order 101, which criminalizes participation in protests, assemblies and vigils, as well as waving flags and distributing political material. Efforts to influence public opinion are prohibited as “political incitement.”

In December 2017, a video was released of Ahed slapping a soldier in the front yard of her house just hours after her cousin had been shot in the head and put in critical condition by Israeli soldiers who fired at him during a non-violent demonstration.

The next day, Ahed and her mother were pulled from their beds in the middle of the night by Israeli soldiers, separated, and imprisoned. Ahed was imprisoned for eight months, and released in July 2018.

Her father told al-Anadolu News Agency that Israeli officials had tried to ban her from traveling abroad, and from speaking in Europe about the Israeli occupation.

In response to the honor by Real Madrid, Emmanuel Nahshon, the Israeli foreign minister spokesman, tweeted in Spanish, “A shame! Real Madrid receives a terrorist who incites hatred and violence. What has that to do with the values of the football?!?!”

The seventeen year old has, in the past, raised the ire of numerous Israeli officials.

In April, Bezalel Smotrich, a member of the ultra-nationalist Jewish Home party, tweeted: “In my opinion, she should have gotten a bullet, at least in the kneecap. That would have put her under house arrest for the rest of her life.”