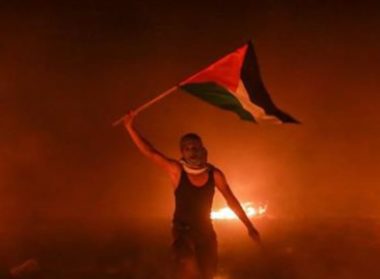 The soldiers shot three Palestinians, east of the al-Boreij refugee camp, in central Gaza, before they were rushed to the Al-Aqsa Hospital, in nearby Deir al-Balah.

Medical sources said one of the Palestinians suffered life-threatening wounds.

Furthermore, the soldiers shot two Palestinians, including one who suffered a serious injury, near the perimeter fence, east of Khan Younis, in the southern part of the Gaza Strip. They were rushed to Nasser Hospital in Khan Younis.

Another Palestinian was shot with a gas bomb, east of Gaza city, and suffered a moderate injury.

Media sources in Gaza said the soldiers fired many live rounds, high-velocity gas bombs and concussion grenades, at Palestinians, protesting on their lands, near the perimeter fence, in several parts of the Gaza Strip.

On Friday, September 28th, the soldiers killed seven Palestinians, including two children, and injured 506 others, including 90 with live fire; three of them suffered serious wounds, during the Great Return March processions, in the Gaza Strip.