Stabbed In The Heart 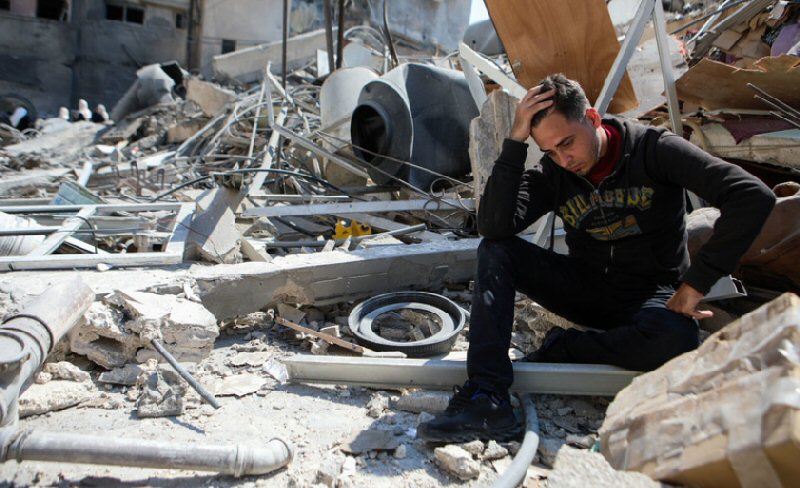 Amjad Ayman Yaghi is a journalist based in Gaza.

Walid al-Shawa dreamed of a bright future when he was younger. Yet adult life has been cruel despite years of planning.

Starting as a child, Walid spent 10 years moving from one job to another. A permanent job was beyond reach in his besieged Gaza community, which suffered the closure of industrial and commercial institutions.

His future became decidedly more bleak when Israeli forces destroyed his home in March – just three weeks before he was due to get married.

On 25 March, he was spending a pleasant evening with his fiancée, Naela al-Jalis, in her house in the al-Shujaiyeh neighborhood of Gaza City. As they prepared to sit down to dinner, his mother called, spoiling the moment.

She asked Walid to return home to his al-Rimal neighborhood in the city. The whole neighborhood was being evacuated following an Israeli threat to shell a nearby building used by the Gaza authorities.

Walid quickly drove home, reaching the neighborhood in four minutes. He found himself looking at his small apartment that he then shared with his sister Hiba and her four children. Distraught, he imagined how it might be destroyed before his eyes and how he and Naela would not be able to move in after their wedding.

At that moment, he felt his life prospects to be in turmoil.

Ten minutes after his arrival, the “warning” missiles started falling. The vicinity was repeatedly bombarded. The building was hit by eight missiles, according to Al Mezan, a human rights group.

Eventually the four floors and eight apartment units of the Hassouna residential building came crashing down.

In the devastating aftermath, Walid said: “I feel demoralized. I don’t know what to do. I lost my future. When I look at my destroyed house, it feels like I’m being stabbed in the heart.”

Walid, now 26, lost his father as a 12-year-old child. His father had long been in poor health, having survived a heart attack just a year after Walid’s birth.

Confronted with such a profound loss at an early age, Walid worked hard as an adolescent to feed his family. He finished the first year of secondary school and then started work to help his family financially.

“I worked in different jobs: a worker in a restaurant, as a greengrocer, in a clothes shop and in the furniture polishing business. Now I work as a taxi driver. Since I was 22, I have been setting up my life and planning for marriage, stability and establishing a family to overcome being fatherless during part of my childhood.”

His planning was thrown off course by forces out of his control.

“The occupation aircraft don’t pay attention to whether I want to marry or not. My crime is living in Gaza. Wherever I go, I am subjected to danger.”

The most significant item Walid inherited from his father was the apartment. For six months, he furnished it in anticipation of his wedding.

Days before the devastation, his fiancée brought her possessions, including clothes and jewelry, to start her anticipated married life. Walid spent some $2,800 on wedding expenses. “All of this was demolished and is now under the rubble. I didn’t find anything.”

Setback is not new to Walid. His father, who had heart disease for 13 years, worked as an employee of the Palestinian Authority. When he died, his wife Hanan, now 55, was paid $150 monthly of her deceased husband’s salary. The money is insufficient.

Hanan told The Electronic Intifada that the family is a humble one and without many acquaintances or networks.

“When Walid got engaged, he didn’t tell our extended family,” she said. “But shortly before the date, he told our relatives and acquaintances to prepare themselves for the wedding. They could scarcely believe him. Now, however, his dreams are destroyed. The occupation was cruel to him.”

Hanan doesn’t know if Walid and Naela will marry after the shock of the destruction.

For his part, Walid is trying to remain steadfast, hoping to push back the wedding date only two months.

But doubt does creep in. He is left wondering whether his dreams still can come true following so much hard work, sacrifice and the setback of being left homeless by the attack – with his sister fleeing for the night with her terrified children to the relative safety of al-Shifa hospital.

All of them – Walid, sister Hiba and her four children – are now together in a temporary rental apartment.

His sister Hiba tries to console him. Her children are suffering too following the destruction of the apartment.

“I look at my four children crying about their lost toys while my brother looks at them from his own shock,” she said. “I don’t know how the Israeli army thinks. When their army targets us, they’re shelling our dreams. It’s as if they don’t want us to breathe.”

They are not alone. Al Mezan has noted that 41 people from nine families were displaced in the attack on the residential building, including 25 children. Israeli occupation forces launched more than 23 airstrikes during the bombardment on 25 March and early the following day, with some 72 missiles fired into the densely populated territory.

The latest loss brought back memories for Walid and his family of the wider destruction in Gaza in 2014 when Israel’s aggression caused widespread devastation.

The losses this year were on a much smaller scale. But for Walid and his family the personal setbacks are enormous and raise profound questions about their future.