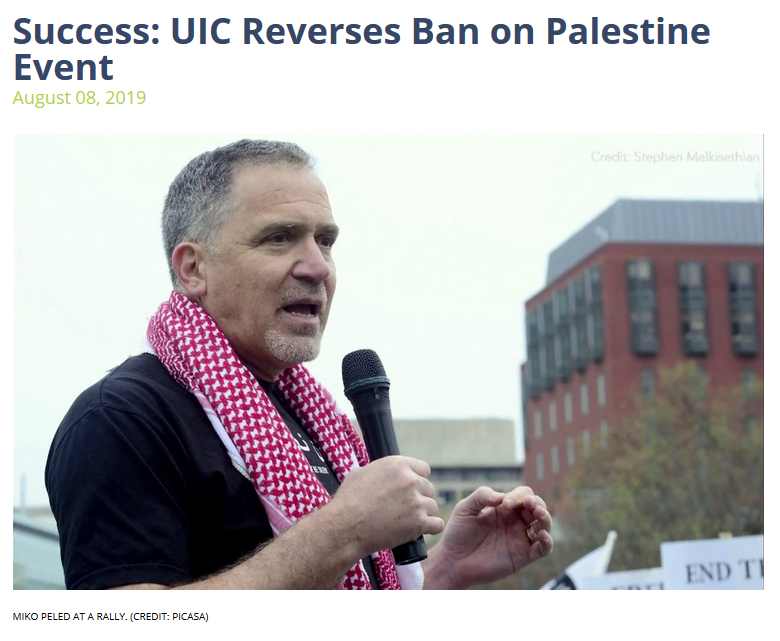 By Palestine Legal: A community group in Rockford, Ill., that had been blocked from renting space for an event featuring Israeli-American activist and author Miko Peled successfully held their event on Saturday after Palestine Legal intervened.

In June, the Truth Squad of Rockford attempted to rent an auditorium at the University of Illinois Health Sciences Campus-Rockford for their August 3rd event. Though the space was available for use, the campus refused to rent it to the group after learning the topic of the event, An Israeli’s Search for Peace and Justice in Palestine.

An administrator informed the community group that campus’s head of communications and regional dean had decided that they “would not be able to make the space available to [the group] for that activity.”

Palestine Legal explained to the administrator that because the campus had opened up the space to off–campus groups for a diverse range of events, it could not refuse to rent space to the Truth Squad of Rockford simply because of the viewpoint the event was expressing. The First Amendment prohibits public entities like the University of Illinois from engaging in viewpoint or content-based discrimination.

The university counsel agreed and allowed the event to move forward. Peled spoke on August 3rd to an audience of approximately 125 people, describing the realities of racial segregation in Israel and Palestine.

Organizers reported that they were approached by many audience members after the event, expressing surprise at what they had learned and thanking them for bringing Peled to speak to their community.

“We’ve seen this happen again and again with Palestine-related events on campuses,” explained Palestine Legal staff attorney Zoha Khalili. “It’s critical for groups to stand up for their First Amendment rights in these situations.”

The University of Illinois understood its mistake and quickly corrected it. Viewed in the context of many similar incidents throughout the country, however, such obstacles amount to a massive censorship campaign. Palestine Legal has responded to over 1,300 incidents of suppression of Palestine advocacy in the United States since 2014.