Soldiers Abduct A Child From His Home In al-‘Isawiya 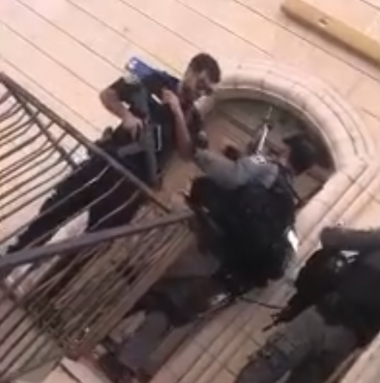 Many Israeli soldiers and police officers invaded, Thursday, a Palestinian home in the al-‘Isawiya town, in occupied East Jerusalem, after destroying the main door of the property, and abducted a child in front of his brothers.

Mohammad Abu al-Hummus, a member of the Follow-up Committee in al-‘Isawiya, said the soldiers used tools to damage the front door of a home, owned by Wa’el Abu Hadwan al-Fakhouri, and invaded it, causing severe anxiety attacks among seven children, who were alone in the property without their parents.

The children were trying to open the heavy door for the soldiers to enter the property without causing damage, but the army went ahead and destroyed it.

The soldiers then abducted Saleh al-Fakhouri, 13, after placing him in a car driven by undercover officers.

Razan al-Jo’ba, a lawyer of Wadi Hilweh Information Center in Silwan (Silwanic), said the soldiers abducted the child, and took him to the police in Salaheddin Street, in Jerusalem, after accusing him of throwing stones at army jeeps.

It is worth mentioning that the soldiers frequently invade the home and stores, owned by the family, and conduct very violent searches, in addition to imposing fines.

The family owns their home, stores and lands in the area since the year 1954, before Israel occupied East Jerusalem in 1967, but are facing constant invasions, violent searches and attempts to confiscate their property and force them out.