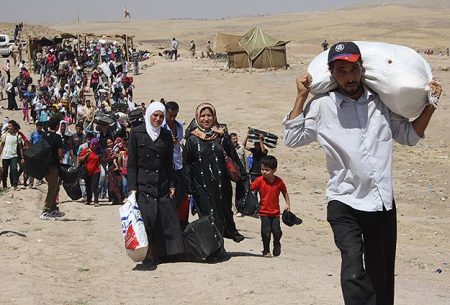 The Working Group for Syrian Palestinians informed that dozens of Palestinian families were forced to leave Deraa refugee camp and the neighborhood of Tareeq Alasad, due to the ferocious bombardment by the Syrian Arab Army and the growing clashes between the army and its opponents.

The group said, in its daily report published on Facebook, that forces targeted the camp yesterday with a rocket.

The group added, according to Al Ray, that the neighborhood of Tareeq Alasad was bombed by explosives and heavy tanks which led the city to a state of devastation and fear.

According to the statistics of the group,  people of Deraa camp are facing hardships due to the siege, clashes and bombardment which has caused the destruction of 80% of the city buildings and the demise of 244 citizens.

It’s worth mentioning that the informal statistics show that the number of the families who didn’t leave the camp doesn’t exceed the 149 out of 4,500 families who had been there until 2011.

Furthermore, the roadblocks installed by the Syrian army continue to prevent Palestinians from returning to their homes in Alsabina camp, in the countryside of Damascus, despite the camp having no opponents of the armed Syrian troops.

The people of the camp demanded the army and its supporters to allow them to go back to their camp after 1,185 days of entry-ban. The people were forced to leave due to clashes which erupted between the army and its opponents. The Syrian army eventually took a complete control of the camp.

Eyewitnesses expected that 80% of the camp has been destroyed, especially the area extending from Muaath Ben Jabal mosque to the Alakrad bakery that is considered to be the western entrance to the camp.

According to the group, people who left their homes have  undergone many hardships, including economic and employment crises.