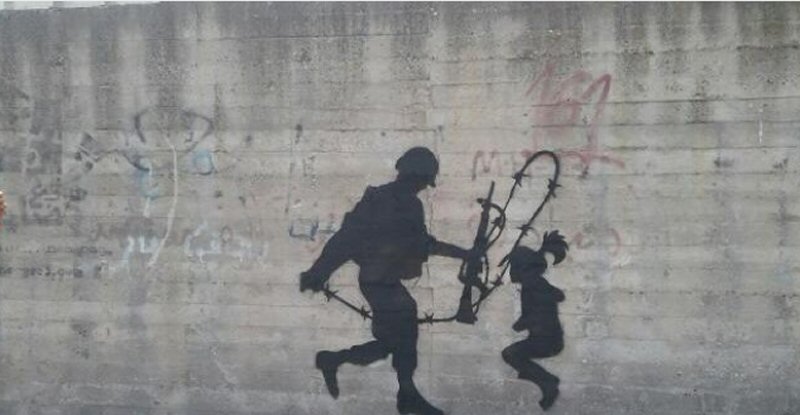 The European graffiti artist, who prefers to keep his identity unknown and goes by the name “Cakes, agreed to talk about his history and over a hundred graffiti stamped on one of the world’s most polemical walls.

Cakes, a 33 years old graffiti artist, leaves his art on the 750-km-long separation wall built by Israel, and his art is easy to identify. His drawings are always of children drawn in black in order to represent shadows. Each symbolizes a kind of protest against war and building walls – material and immaterial – that separate people and make peace in Palestine ever more distant. Thousands of tourists passing through the region can easily see that each graph represents, but the artist explains that their meaning goes a little further than you can see.

Cakes reported that he was abused as a child by his own father, who was an alcoholic, physically raped him and considered the boy a stranger in the house. “My father tried to kill me. My life was not easy. I found in Palestine a way to help those who need peace and learn to deal with this trauma. When you are a child and your social past is as difficult as living in Palestinian refugee camps, it creates different micro worlds, a world like mine where violence occurs every day. I feel good here. ” The artist did his first street work in 2011. In Palestine, graffiti on parts of the wall in the West Bank region at least once every six months. Although the building is monitored and controlled by Israeli cameras 24 hours a day, Cakes is not intimidated and stated that he was never arrested or questioned by Israeli soldiers.

“I do not consider myself to be doing something wrong, so I do not even cover my face as graphite. I have nothing against anyone and I have always believed that regardless of the war, most Palestinians and Israelis want and need peace, “he explained. In Europe, he has another profession, which he preferred not to reveal, but also sells his works on social media for fund raising and travel to Palestine. “As long as it is well received here, I will continue to bring new ideas.”

Regarding plans for the future, the European has revealed that it has already decided on its next destination. “I’ve heard of the wall being built by the president of the United States [a barrier intended by Republican Donald Trump on the border with Mexico] and I was interested. I definitely want to know this place, I even prepared the first drawing that I want to graph there. As long as I can, I will continue to send messages of peace through my art, and if possible, in various parts of the world, “he concluded.