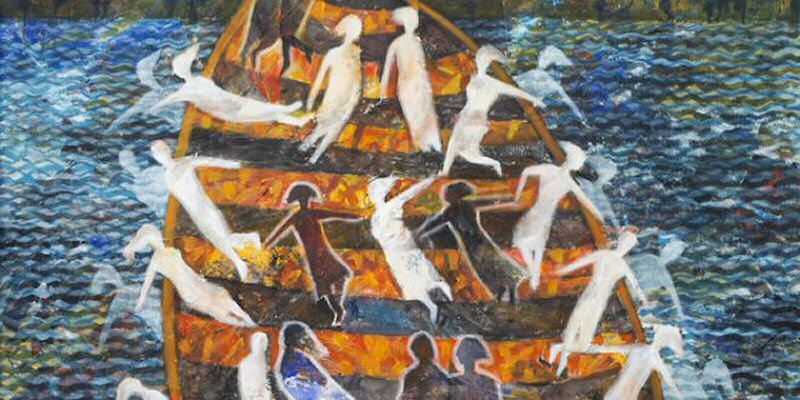 Zawyeh Gallery is glad to announce the opening of Tayseer Barakat’s solo exhibition “Shoreless Sea” on Wednesday, 15 January, in Ramallah. The exhibition includes a series of new artworks which manifest as an account on refugees’ desperate journeys to cross the Mediterranean to Europe in search for a normal life.

For Barakat, the Mediterranean was part of his life; he himself is a refugee who lived near the shores of Gaza as a child and by the shores of Alexandria as an undergraduate student. Yet, the Sea became colder since then. It also became merciless and its appetite grew stronger. Suddenly, it hid its beaches, leaving people on board to wander in desperate search of ways to escape.

A boat throws those on board in the sea, souls flying in the skies, rescue missions, a mother holding her children tightly, two lovers, border patrols, a helicopter flying over the heads … heroic journeys culminate in a line of detained refugees walking to an unknown destination. In his exhibition Barakat explores separation in a series of artworks that reflect the coldness of the sea and the world’s indifference to the refugees’ plight, through paintings dominated by a few scattered figures and large areas painted in white.

Barakat says that this exhibition is a contemplation into what that Arab people have become and the transformation of big numbers into refugees with uncertain future. He adds that it is also a meditation in the coldness of the the world as it witnesses the refugee tragedies indifferently. For him, the exhibition is a journey into his inner self as a refugee and an exploration of the meaning of separation (from homeland and the loved ones), and how life has transformed the region into big, enormous waves, in recent years.

Barakat was born in Jabaliya refugee camp, in Gaza, 1959, and he completed his arts education in Alexandria, Egypt, in 1983. Barakat has held many solo exhibitions and has participated in numerous group exhibitions with many of his contemporaries in Japan, USA, Brazil, Europe, and across the Arab world. His solo exhibitions have included São Paulo Biennale, Brazil, in 1996, (“The Number that Became a Name”); Ramallah, in 2006; and (“Distant Voices”) at Zawyeh Gallery, Ramallah in 2014. He is a founding member of Al Wasti Art Center in Jerusalem and the International Art Academy-Palestine.