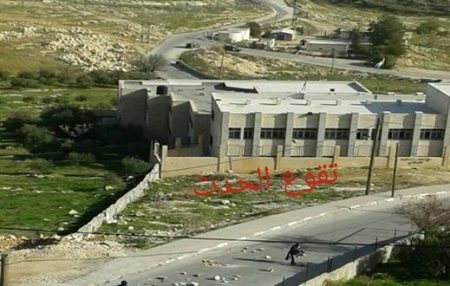 Local sources from the village said that soldiers broke into the school and assaulted students and teachers with pepper spray.

The attacks caused clashes to erupt in the area, according to the PNN.

Witnesses told Ma’an News Agency that teachers who tried to prevent soldiers from taking down posters commemorating 17-year-old Qusay Hassan al-Umour — who was shot dead by Israeli forces in the town in mid-January — were assaulted and pepper-sprayed in the face.

Adel al-Shaer, Murad Mufarrih, and Alaa Hmeid were treated on the scene for the inflammation caused by the pepper spray.

After troops stormed the school, clashes broke out in the town between Israeli soldiers and schoolchildren. Witnesses said Israeli soldiers chased the youth through the town’s alleys and showered the area in tear gas. No injuries were reported.

An Israeli army spokesperson said they were “looking into the case”.

Israeli military presence in Tekoua’ has escalated since al-Umour was shot dead during clashes in the town, when the Israeli army claimed that the teen had been the “main instigator” among Palestinian youth throwing stones at border police.

However, video footage showed forces running towards the teenager’s motionless body moments after he was shot, as he was lying in a field at least 100 meters away from the road where the clashes were taking place.

Investigations by BADIL prompted the Palestinian NGO to brand the shooting as an “extrajudicial killing,” asserting that the teen “could not have presented a lethal threat to the well-protected Israeli border police from a distance of around 100 meters, and the use of live ammunition against him was therefore unjustified.”

Following the incident, at least seven Palestinian youth have been detained in Tekoua’ during overnight raids, while Israeli forces previously installed a military base at the western entrance to the town, periodically preventing residents from entering or leaving.

Israeli forces also raided the village earlier this month to take over a Palestinian home that has a view of the site of al-Umour’s killing, turning the house into a military post.