Ten Palestinians Detained from the West Bank and Israel 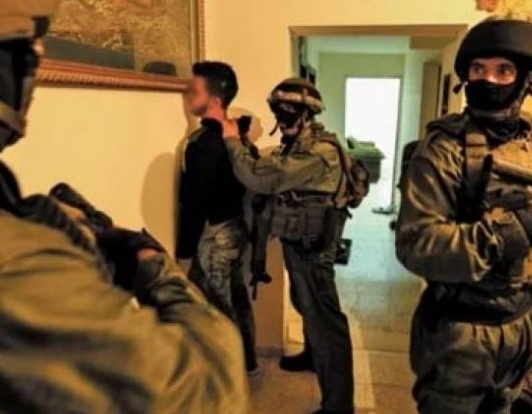 Israeli soldiers detained, before dawn on Thursday, eight Palestinian civilians from the occupied West Bank, and two from inside the 1948 occupied lands referred to as Israel, local sources said.

Security sources told the Palestinian News and Information Agency (WAFA) that Israeli troops stormed and searched the home of a young man in Meithalun town, south of Jenin in the northern West Bank, before detaining him.

Inside of Israel, occupation police detained two former prisoners in addition to a young man from the West Bank, all of whom are residents of the village of Silat al-Harithiya, northwest of Jenin, just south of the illegal Annexation Wall.

In the southern part of the occupied West Bank, north of Hebron, soldiers invaded the town of Surif, and detained yet another former prisoner.

Soldiers stormed Idhna town, west of Hebron, ransacked homes and detained one Palestinian man, in addition to storming Halhul town, north of Hebron, and detaining another.

| Soldiers Detain Thirteen Palestinians, Injure one in the West Bank |