Soldiers Detain Thirteen Palestinians, Injure one in the West Bank 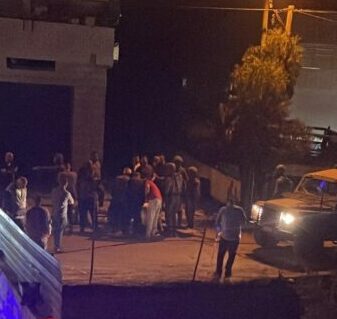 Israeli forces detained, on Tuesday night, shot one teenager and detained another, and on Wednesday at dawn, they detained thirteen more Palestinian civilians, according to the Palestinian News and Information Agency (WAFA).

In the central occupied West Bank village of Husan, west of Bethlehem, during confrontations, Israeli soldiers detained Muhammad Jamal Hamamreh, 16, and opened fire towards those protesting the invasion, striking a teenager in the thigh.

The identity of the injured child was not available at the time of this report, he was rushed to hospital for emergency treatment.

Also in the same village, soldiers stormed and ransacked the home of former prisoner, Jamal Jabr Hamamreh, and detained him.

In the Al-Fawagha neighborhood in Bethlehem city, Israeli troops detained a young man, identified as Mahdi Nabil Al-Assis from his home.

Southwest of the city, soldiers stormed the al-Fawwar refugee camp, and detained another former prisoner.

Lastly, according to Muntaser Samour, the Director of the Palestine Prisoners’ Society (PPS) office, soldiers detained another former prisoner after storming and ransacking his home in Meithalun town, south of the northern West Bank city of Jenin.