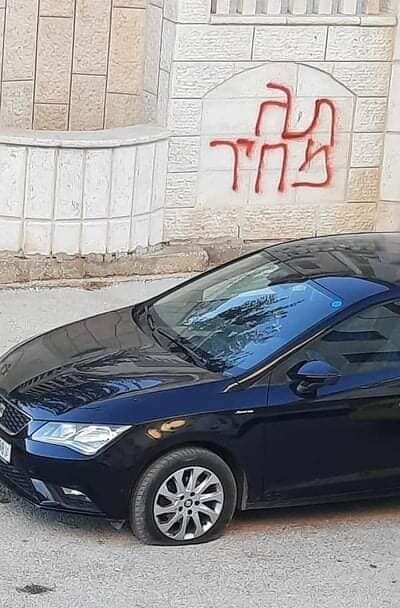 Witnesses stated that the settlers entered the city overnight and slashed the tires of three vehicles, spray-painted the star of David and hateful and threatening phrases on Palestinian-owned vehicles and homes.

Photos show Hebrew writing which translate into “destroy the enemies” and “there are enemies in these houses”.

These phrases including “we’ll fight Palestinians” were scrawled across Palestinian-owned property, with the aim of terrorizing and intimidating the indigenous population.

Israeli authorities do not provide any protection for the unarmed Palestinians, instead they aid the illegal settlers who commit the crimes against the unprotected population.

Video | In a fresh attack, colonial Israeli settlers stormed the city of Al-Bireh in the center of the occupied West Bank last night, spray-painted racist graffiti on walls and parked vehicles and punctured the tyres of some of them. pic.twitter.com/nAtAUWinIL