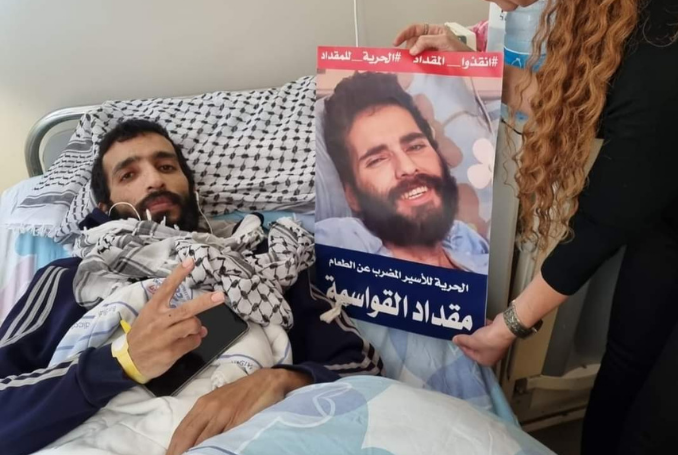 (November 7, 2021) by Zubayr Alikhan for the Palestine Chronicle

The hunger strikers—whose status has surpassed heroism in the eyes of Palestinians around the world—are refusing all forms of food and supplements.

Four of the hunger strikers are now in critical condition in Israeli hospitals, while Kayed Fasfous and Miqdad Al-Qawasmi—striking for 116 and 106 days respectively—are “in imminent danger of death”.

According to Palestinian human rights organization Addameer, both Fasfous and Al-Qawasmi suffer from “constant pain, extreme vitamin deficiency, abnormally low heart rates, and minimal mobility”. Despite their rapidly-deteriorating health, the hunger strikers remain defiant. They have vowed to continue striking until they win their freedom, or else, martyrdom.

In response, Israeli occupation forces have threatened force-feeding, a violent procedure that has also been used by the United States military to torture Guantanamo Bay inmates. When force-fed, prisoners are strapped down, with thick tubes inserted from the nasal passage or mouth and forced through the esophagus into the stomach. The procedure causes intense pain, gagging, choking, vomiting and sometimes death. It has been condemned by the United Nations as “torture”, amounting to “cruel, inhuman and degrading treatment”.

Some might wonder what crimes warrant such torturous detention. The answer: none. At least, none which have yet been committed. No evidence nor information of any crime has been produced, or made accessible to anyone outside of the Israeli government.

Individuals can be imprisoned without charge, trial, or conviction. B’Tselem explains that “in administrative detention a person is held (…) without having committed an offense, on the grounds that he or she plans to break the law in the future”. This practice, based on the possibility of future criminal activity, is hence not bound by the constraints of time. The six hunger strikers have fallen prey to this draconian practice.

United Nations experts have expressed “grave fear” for the lives of the strikers, calling on Israel to “release or charge” them immediately. For the six Palestinian political prisoners, freedom and justice are foundational prerequisites for life.

Upholding the principles of ethics and morality places a heavy burden on their frail shoulders. Yet, in their eyes, these values are worth defending by all means necessary. Their empty stomachs, unbreakable will, and defiant pursuit of justice expose the illegitimacy of Israel’s oppressive occupation.

Unsurprisingly, the hunger strikers have garnered worldwide attention across judicial and public spheres. Of the greatest recognitions of their struggle, and the illegality of their detention, are the aforementioned UN statements. On social media, numerous hashtags have gained traction, namely: #FreeThemAll, #أنقذوا_الأسرى (Translated Save the Prisoners), and #معركة_الامعاء_الخاوية (The battle of empty stomachs).

It is the responsibility of the international community—and the bodies erected to represent its interests—to ensure that the injustices taking place in Palestine are combatted and condemned.

To effect change, “we”, as a global community of conscience, morality, and equality, must band together to challenge and protest the abhorrent discrimination of Israeli apartheid. Be it through Boycott Divestment and Sanctions (BDS) strategy, writing to one’s elected representative, taking part in a peaceful demonstration, or starting social media campaigns, defending the rights of those facing oppression and injustice is an imperative through which we must take action. In the most visceral, and vigorous sense, their lives, the lives of the heroic hunger-strikers, depend on it.