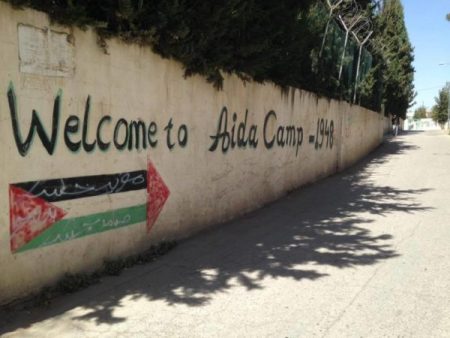 Tucked within the antiquated corridors of the municipality of Bethlehem, there lies Aida Camp, established 1950.  The densely populated cement structures, thinly outlined by narrow passageways, are a living summation of the occupation of Palestine itself.

Scraping elbows with the massive checkpoint pathway between Bethlehem and Jerusalem, hedged by the West Bank apartheid separation wall and situated nearby two large illegal Israeli settlement blocs, Aida camp sits on the front lines of the Palestinian struggle to exist in the grim face of an ethnic cleansing.

For the internally displaced residents of the camp, a predominant feature of life inside Aida is the near daily child arrests that occur.  This specter links arms with prolific doses of teargas that are hurled by occupation forces over the wall, drugs being smuggled inside, staggering unemployment rates and regular military incursions.

Conflating the elements of imposed unrest in the camp, Aida has been termed a ‘gateway’ for drugs being that it is located in the space yawning from the physical intersection of occupied and occupier.  Resident’s note a common scenario that unfolds in the camp.  “The soldiers raid the camp and everyone goes running to hide.  The outside drug dealers come once the soldiers scare everyone away and hide the drugs in the cemetery and then the local drug dealers retrieve the drugs and deal them inside the camp.”

From his office in the vibrant center of the non-profit Alrowwad, an “independent, dynamic, community-based” bastion of culture and empowerment in Aida, Dr. Adbelfattah Abusrour, Alrowwad’s founder, poetically unfolds the organization’s vision for the people of Aida camp.  “We believe it is important to introduce creative elements for the children.  Games, theater, photography, painting.  I call this beautiful resistance.  Children should have access to this experience.”

In the face of overpopulation and occupation, camp resident Dr. Abdelfattah knows the emotional pipeline that Aida’s youth faces, “Aida is a hotspot because it is so near the border.  They want us to be silent on every level.  They target the young to be collaborators.  The high unemployment rates lead to despair.  And when children feel despair, they feel unsafe.  At that point, the best thing is to want to die.”

But with Alrowwad injecting an intoxicating blend of art and fire into daily camp existence, the trajectory manifests, colorfully so, “We want children to express themselves in the most beautiful ways.  To want to live for Palestine.  Not to die for Palestine.  The issue is that people cannot tolerate injustice for eternity.  It varies, our tolerance for injustice.  For me, I can make a play or a painting, for someone else, he will blow himself up.”

The Alrowwad center features a bright classroom area stocked with books on arts and history of various countries and cultures, a radio station, theater and more. With an arts unit, media center, women’s program and environmentally centered project, Alrowwad leaves no creative stone unturned.  They have taken their programs on international tour to share the beauty of their creations, as well as to “show the children what life in a free country is like.”  However, the occupation, insecure with the world gaining view of expressive, dignified Palestinian life, has harassed and even gotten their international shows cancelled, “The Zionists have contacted our venues around the world and told them that we are terrorists and they need to shut down the show, and sometimes they have.”  But Alrowwad presses on. 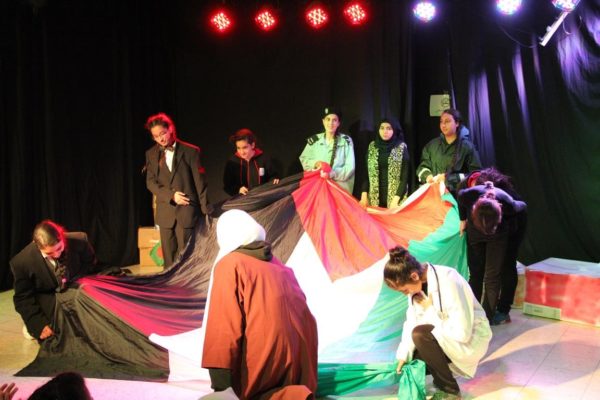 On this warm afternoon, children crowd around computer monitors while teachers and volunteers sweep busily through the room, guiding and interacting, a conference of cheerful sounds.  Juxtapose this scene with the tragic display just over one year ago when 13-year-old Palestinian youth Abed al-Rahman Shadi Obeidallah, was shot in the chest by Israeli forces, “by mistake” as he made his way to his home in the camp after school. Abed’s murderer was held to no accountability.

Dr. Abdelfattah’s mission is to create safe, expressive spaces for the Palestinian youth of the camp, to abolish the pipeline and create a life not prescribed from the miseries of injustice.  “The international community doesn’t care about our politics.  Nothing is fine being reduced to a humanitarian cause, a political cause.  This is more humiliating than occupation itself.  And it’s challenging to change that.  Arts and culture are not a priority.  But this is what are pure bridges between us as human beings.  It’s what brings us closer rather than marginalizes us.” 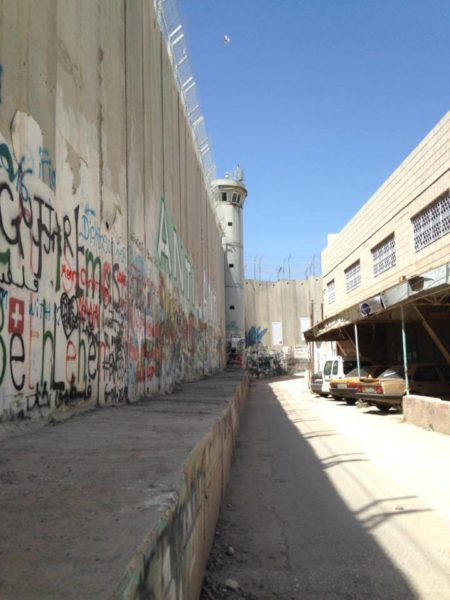 Through daily military incursions and the arresting theft of Aida’s children, the beautiful resistance that Alrowwad conjures and enforces is the importance of education as a weapon against oppression.  But an education that is rewritten from traditional norms, “Education has always been based on dictation and memorization.  It is up to the teacher to bring out the student’s excellence.  We don’t want to be these gods of knowledge.  We teach them to have fun.  The essence of this is to give these possibilities and build the human before building the knowledge.”

With a nearby, illegal separation wall force-instilling a sense of otherness, along with the grinding oppression and onslaught against Palestinian tradition, life and identity itself, it is the beautiful resistance of Dr. Abdelfattah and the Alrowwad organization that is painting, for Aida’s youth, a dynamic and electrifying way forth.

Via the International Soldarity Movement.

Also from ISM: 04/17/17 Six Year Anniversary of the Death of Vittorio Arrigoni (VIDEO)

Israeli Soldiers Abduct A Palestinian In Hebron, Injure Many In Bethlehem