The Cost of Occupation: Jerusalem 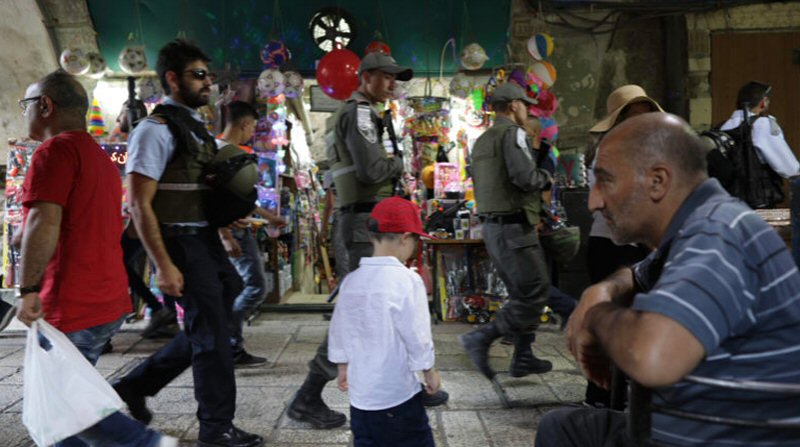 The Old City on the first day of Ramadan, 2017. Photo credit: Afif Amira for WAFA.

Three Israeli policies target Palestinian economic life in Jerusalem: the expulsion and banning of the Palestinian Chamber of Commerce; the separation barrier; and high municipal taxes.

Innumerable political challenges stand in the way of the development of a healthy economy for Palestinians in Israeli-occupied Jerusalem. Under the shaky status of “permanent residents,” Palestinians in the city continue to live without passports or political representation. A byzantine Israeli permit regime not only bars Palestinians from building new structures in Jerusalem, but also sanctions the systematic demolition of their homes. The result is the proliferation of Jewish-only Israeli settlements throughout the city and its surrounding hinterlands. An Israeli security dragnet further suffocates Palestinian life in the city. Israeli police, armed with combat-grade weapons and armor, routinely raid Palestinian neighborhoods and conduct sweeping arrests. Occasionally, Israeli police shoot and kill Palestinians without cause. Permanent checkpoints exist and flying checkpoints can be erected at moment’s notice.

Related to these political challenges are Israeli tactics of economic exploitation and economic warfare in the city. This report analyzes three Israeli policies that target Palestinian economic life in Jerusalem: the expulsion and banning of the Palestinian Chamber of Commerce; the separation barrier; and high municipal taxes. These policies intentionally prevent Palestinians from developing any sort of viable economic life and create unlivable conditions for Palestinians, another pretext for their expulsion from Jerusalem.

The United Nations (UN) 1947 Partition Plan for Palestine declared Jerusalem a ‘corpus separatum’ under a special international regime administered by the UN. However, in 1948, Zionist paramilitaries and Israeli forces captured West Jerusalem and 40 nearby Palestinian villages, along with 78 percent of Historic Palestine. During its seizure of the holy city, Israel expelled between 64,000 and 80,000 Palestinians from their homes.[1]

After the 1948 war, Jerusalem was divided into east and west. The Israeli army controlled 85 percent of the city in the west; the Jordanian army controlled eleven percent of the city in the east; the remaining four percent was designated as “no man’s land.”[2] Two years later, in 1950, Israel passed the Absentee Property Law, which defined the property of Palestinians had who fled the area as “abandoned” and therefore under the ownership of the Jewish state.

In 1967, Israel captured the remaining 15 percent of Jerusalem and expelled another 26,000 Palestinians from the city. Israeli authorities quickly implemented policies to institutionalize the military occupation and establish a Jewish majority in Jerusalem. Three months after seizure of East Jerusalem, Israel conducted a census that became the determining factor regarding whether a Palestinian could claim Jerusalem residency. Palestinians who had fled the area to avoid Israeli violence lost residency rights to their hometowns. For those who were able to secure Jerusalem residency under these conditions, their status remained insecure: if a Palestinian resident of Jerusalem spends more than seven years in a foreign country, becomes a citizen of a foreign state, or relocates to the West Bank, Israeli authorities can revoke his or her residency rights.

Since 1995 Palestinians in Jerusalem have also been targeted by Israel’s “center of life” policy, which dictates that to maintain their residency rights, Palestinians must prove that their everyday lives revolve around the city. The threat posed by this policy to Palestinian life in Jerusalem intensified in 2002, when Israeli authorities altered the city by cordoning off the neighborhoods of Shuafat refugee camp, Kufr Aqab, al-Walaja and al-Sawahra with the separation wall. The wall, which was built with the dual intention of capturing as much territory as possible with as few Palestinians as possible, forced most Palestinian Jerusalemites to pass military checkpoints in order to move within their city. Indeed, all of the Jerusalem municipality’s urban plans overtly seek to maximize the number of Jews in the city and reduce the number of Palestinians. At least 14,416 Palestinians have lost their Jerusalem residency status from 1967 to 2014 due to this residency system. Meanwhile, Palestinian residents of the West Bank and Gaza have been barred from entering Jerusalem without special permission from the Israeli military since 1991. The construction of the separation barrier in 2002 strengthened Israel’s ability to maintain Jerusalem as off limits to these Palestinians.

The international community recognizes Jerusalem’s Palestinian residents as protected under the Fourth Geneva Convention. The UN Security Council maintains that all legislative measures and actions taken by Israel to alter the character and status of Jerusalem are null and void under UN resolutions 242, 267, 471, 476, 478.

From 1948 to 1967, under Jordanian rule, the Palestinian economy in East Jerusalem grew rapidly, primarily from tourism. According to the UN, in 1966 the tourism sector in the East Jerusalem and Bethlehem area contributed approximately 14 percent of the West Bank’s gross domestic product (GDP) and hosted 40 out of the West Bank’s 59 hotels. However, in 1967 Israeli rule over East Jerusalem severely damaged the Palestinian economy. Negative affects to the tourism industry were immediately felt: the number of hotel rooms in East Jerusalem declined by 40 percent between 1969 and 1973. When Palestinians resisted the Israeli occupation in the First and Second Intifadas, East Jerusalem’s economy was further eroded by punitive Israeli measures, including tax raids and curfews.

As will be discussed in further detail below, today the separation barrier, expulsion of the Palestinian Chamber of Commerce and high municipal taxes remain key threats to Palestinian business, life and presence in the city. The targeted nature of these policies is evident in the discrepancy of poverty rates for Jerusalem’s Palestinian versus Jewish population. While 30 percent of Israeli Jews in Jerusalem live below the poverty line, a staggering 75 percent of Palestinians in the city live below the poverty line. Though it is difficult to find unemployment rates for East Jerusalem, as usually the area is included with West Bank statistics, the Palestinian Central Bureau of Statistics reported between 2011 and 2015 that unemployment for Palestinians in Jerusalem fluctuated between 19 and 13 percent. According to the Association for Civil Rights in Israel (ACRI), 25 percent of Palestinians in Jerusalem are employed in the restaurant or hotel sector; 20 percent are in education; 19 percent are service providers. Mohammad Qorish, an economist based in Jerusalem, adds that the total GDP contribution of East Jerusalem to the West Bank stands at 14 percent today.

The expulsion of the Palestinian Chamber of Commerce:

In 2001, the Israeli Internal Security Ministry ordered the closure of the East Jerusalem Chamber of Commerce (EJCC), an umbrella organization responsible for Palestinian economic development and research in the city. After being barred from Israeli controlled Jerusalem, the chamber relocated to al-Ram and al-Eizariya. Both areas are considered part of Jerusalem, but are severed from the city by the separation barrier. Consequently, the ability of the EJCC to facilitate economic development in Jerusalem has been severely constrained. “This situation has negatively affected the lives of many Palestinians, mainly merchants and businessmen, as [the EJCC] cannot facilitate business transactions or properly research the movement of trade in the city,” Director of the EJCC Loa’ al-Hussaini told the AIC. Indeed, not only is it difficult for the EJCC to reach out to merchants in Jerusalem, but Israeli authorities still consider such efforts illegal. When the EJCC held an event for Ramadan in Jerusalem in June 2018, titled “The Activities of the East Jerusalem Chamber of Commerce,” Israeli forces raided the hotel under the orders of Israeli public security minister Gilad Erdan and arrested Chairman of the EJCC Kamal Obeidat. Erdan shut down the event citing the EJCC’s affiliation with the PA.

Ahmad Dandees, an owner of a furniture shop in Souq al-Qattaneen, a market adjacent to al-Aqsa Mosque in the Old City of Jerusalem, explained to the AIC that the Israeli separation barrier decreased his sales by about 50 percent. “Before [the wall], thousands of people from the West Bank used to come to Jerusalem as a part of their regular travels between West Bank cities, usually to shop [in the Old City] and pray at al-Aqsa. At that time, we were in a good position economically thanks to this internal tourism. But now, with the city closed, we are suffering from less and less customers.” Abu Khaled Younis, who owns a supermarket on al-Wad Street in the Muslim Quarter of the Old City estimates that the construction of the separation barrier caused his business to experience a 60 percent loss in sales.

The separation barrier also, of course, directly disrupts trade networks between Jerusalem and the West Bank. For example, today transferring goods between the two areas requires passing through a maze of Israeli checkpoints, which creates an everyday extra expense. Moreover, importing West Bank goods to Jerusalem, in some cases, is illegal under Israeli law. In June 2010, Israel banned pharmaceutical, dairy and meat produced in the West Bank from entering East Jerusalem, under the pretext that these Palestinian goods present a risk to public health. Head of the Palestinian Dairy Council Mohammad As-Sous called the measure a thinly veiled effort to further appropriate East Jerusalem customers for Israeli businesses. Since the initial ban, Israeli authorities temporarily resumed importing Palestinian meat and dairy products, only to ban them once again in 2016. In 2016, As-Sous explained that, if continued, the ban would cost many jobs at his dairy company Hamoda, where sales to East Jerusalem make up nearly 50 percent of total sales.

Palestinian business owners are not exempt from this lopsided system. They pay six Israeli taxes: property tax (arnona), value added tax, income tax, national insurance, payroll tax and license tax. According to Dandees, property tax is the most prohibitive of the Israeli taxes. “We pay 350 shekel for each meter of our store, which is very high.”