The Lie Of The Century 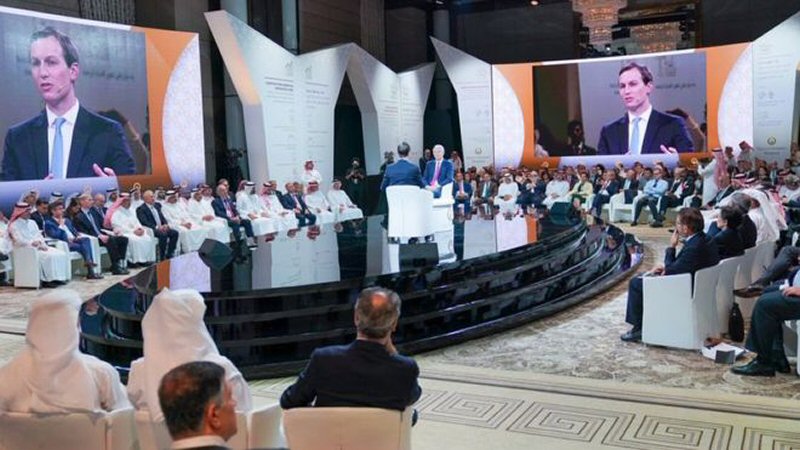 Well, it‚Äôs happened. It‚Äôs real. Mr. Jared Kushner, the son-in-law and Senior Advisor of President Trump has delivered 136 pages of lies, suppositions and conjuring tricks to seduce or compel us Palestinians to accept our fate and surrender our rights. What rights? As far as this document is concerned, Palestinians have no rights whatsoever, and, as for a Palestinian perspective, what is that?

The Palestinians were not even invited to Manama, let alone considered. What about the Israelis? Were they there? Were they invited? On the face of it, no. But, in reality, they were amply represented. What is Jared Kushner if not the team captain for the Greater Israel Project? After all, he is Jewish, an ardent Zionist, an investor in the illegal settlements in Palestine and an advocate, par excellence, for Israeli survival and supremacy.

The Lie Of The Century, as I call it, is just that. A lie. From beginning to end, every word, every supposition of this long-winded deception is to ensure that the Greater Israel Project will advance unhindered, and we, the Palestinians, are to accept the crumbs off the table of our land-lords. Or perish.

But, hang on a minute. How could an occupier who seized our land by brute force be made a legitimate land-lord over us? The answer is simple. In the Trumpian universe, all that matters are power and Mammon. Isn‚Äôt this what the ‚ÄėDeal of The Century‚Äô is all about? American/Israeli power exercised over us Palestinians without mercy? And, what about the money? Oh, yes. There is money, but it is not American nor Israeli money. It‚Äôs Arab money — to be extorted from despotic, Arabic regimes in the Gulf, as per usual. Trump demands and the Arab Regimes of the Gulf and Saudi Arabia oblige. If they don‚Äôt, as Mr. Trump intimated, their shaky thrones wouldn‚Äôt last a week without US protection.

Mr. Kushner promised $50 billion in Arab money to be divided between Palestine, Jordan and Egypt. Nowhere in the document was there any mention of Palestinian political rights, the right of return of the Palestinian refugees or even the Israeli occupation of Palestine. All was conveniently kicked into touch because it doesn‚Äôt matter, you see. What matters is Israeli survival and supremacy and the continued, rapid march of the Greater Israel Project.

I say ‚Äėrapid march‚Äô because who is to stop it? The Palestinians do not have an army, an air force, a navy or even a coalition to stop this march. Jordan has already succumbed to American threats and promises of prosperity. The same goes for Egypt, especially under the hand-picked President Abdul Fatah Alsisi, whose sole purpose is to neuter Egypt and serve as a facilitator for American and Israeli hegemony in our area.

Syria? Western powers, Israel and despotic Arab/Muslim states have made sure that Syria is taken out of the equation by embroiling it in a 7-year long devastating war.

The Gulf States? Saudi Arabia? Instead of stopping this advance of Greater Israel they are facilitating it by making a frantic rush towards normalization with Israel and to form a coalition of the willing to combat a perceived threat from another Muslim country, Iran. The honorable exception is the State of Kuwait, who refused to attend this farce and reaffirmed their total support of Palestinian rights and aspirations.

Let‚Äôs look closely at the word, ‚Äėsurrender‚Äô. Many of you might remember an article I wrote recently, entitled, ‚ÄėSurrender Or Die‚Äô. It didn‚Äôt take too long for the Israelis to prove me right. There it is. From the Grand weasel‚Äôs mouth, none other than Danny Danon, the Israeli Ambassador to the UN. In an article entitled, ‚ÄėWhat‚Äôs Wrong With Palestinian Surrender‚ÄĚ, published in the New York Times on June 24th, one day before the Manama ‚ÄėWorkshop‚Äô. ‚ÄúSurrender‚ÄĚ, he wrote,‚ÄĚ is the recognition that in a contest, staying the course will prove costlier than submission.‚ÄĚ

There you have it. To the victor the spoils.

And, then, comes the other Grand Weasel, Mr. Jared Kushner, to deliver the message of surrender to a room full of weasels. All of these aforementioned weasels, who have been gnawing at our heels for over a century, omitted to consider one vital point: The Palestinian character and pride.

Surrender is not in our character. We‚Äôd rather die standing up, defending our rights than exist, kneeling at the feet of our self-appointed land-lords and benefactors.

Just in case any of those weasels calling for our surrender might have any interest in what we Palestinians want, here is how Executive Member of the PLO, Dr. Hanan Ashrawi, put it: