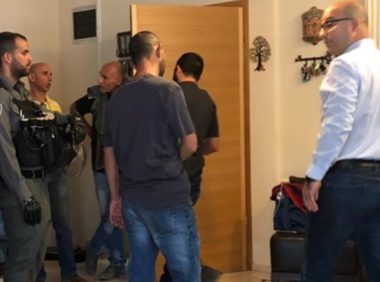 Israeli soldiers abducted, on Sunday at dawn, many Palestinians, including Jerusalem Minister at the Palestinian Government, Fadi al-Hidmi, during the ongoing invasions and violent searches of homes in the town of al-‘Isawiya, and other parts of occupied Jerusalem.

Awad Awad, a Palestinian official who heads the Public Relations and Media Office of the Information Ministry in occupied Jerusalem, said the soldiers and many intelligence officers invaded the home of al-Hidmi in the Suwwana neighborhood in Jerusalem, and ransacked it, before abducting him.

Attorney Mohannad Jabara said the abduction of al-Hidmi came after he welcomed the Chilean President and toured with him in a visit to Al-Aqsa Mosque, an issue that was regarded by Israel as “violating its sovereignty” in Jerusalem.

Jabara stated that the abduction of the Palestinian minister is just another Israeli violation, and a blatant attempt to appease the extreme Israeli right-wing parties and members, who even attacked Israeli police officers and tried to prevent the Chilean president from visiting Al-Aqsa, especially accompanied by Palestinian officials.

In addition, the Israeli soldiers continued, for the second consecutive day, the massive and very violent invasions and searches of homes in al-‘Isawiya town, and abducted many Palestinian youngsters related to Mohammad Samir Obeid, 21, who was killed by the army on June 27th.

The soldiers invaded his home, and his mourning house, and assaulted many residents, before removing Palestinian flags and posters.

Invasions and protests were also reported in many parts of Jerusalem, including its Old City, in addition to Silwan and several other areas.

The soldiers also invaded al-Makassed Hospital in at-Tour town, after surrounding and isolating it, and searched its various sections, looking for wounded Palestinians, before abducting Haidar Dirbas and Ala’ Dirbas.

In addition, the soldiers abducted Ala’ Johar and his son, Mohammad, in Abu Dis town,  east of Jerusalem, and Ehab Sa’id, from Anata town, northeast of the city.