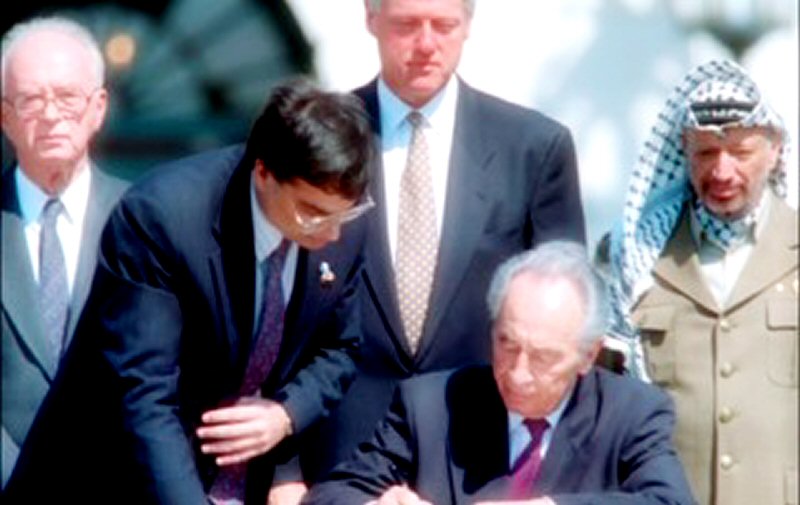 Perhaps the Oslo Accords, which were concluded between the Palestine Liberation Organization (PLO) and Israel, will be registered in the modern and contemporary history as the worst agreement between the representatives of a people under occupation and an occupying power.

Since then, 26 years have passed. The Palestinian negotiator thought that the Accords would be a prelude to the establishment of an independent Palestinian state on the soil of the West Bank (WB) and Gaza Strip (GS). However, he found himself establishing a self-government authority that provides a cover to a “five-star occupation,” that continued with Judaization and settlement building plans, to destroy the dream of a “two-state solution,” and keep the functional Palestinian Authority (PA) that serves the occupation’s objectives rather than the goals of the Palestinian people.

It is the trap, which the late Palestinian scholar Edward Said talked about, when he stated that that ‘Arafat “has entangled his people in a trap from which there is no escape,” and that he had thrown himself among the Israelis and the Americans (Al-Hayat newspaper, 21/8/1995).

In this article, we’ll focus on five major consequences of the Oslo Accords:

The worst in these Accords’ consequences is the fact that the PLO leadership has made a historic concession by recognizing “Israel’s right to exist” and the legitimacy of its occupation of 77% of Palestine. Consequently, the land occupied in 1948 was taken out of the conflict and negotiation circles. In return, Israel did not recognize the right of the Palestinian people to keep the rest of Palestine (WB and GS). There is nothing in the Accords that indicate that WB and GS are occupied lands, there is no Israeli commitment to withdraw from them, and there’s no indication that the Palestinian people have the right to self-determination or establishing their independent state, even on a part of Palestine.

These Accords have dwarfed the national project that aims to liberate Palestine, and restricted it to the establishment of a self-government authority that pursues the establishment of a state in WB and GS, however its survival and development are linked to the will and satisfaction of the occupation. The Palestinian leadership seems to have treated the occupation as a “charity,” which has the good will to respond to the demands of the Palestinian people. Although the main connotation of the Israeli occupation is being colonial, expansionist, aggressive and based on the replacement of the indigenous people. It is fighting for a different identity of the land and people, and seeking to “steal” history as well as the future¬¬.

The PLO itself has secluded itself, and became more like a department of the PA. It was placed in the “recovery room,” to be used when needed to legitimize the practices of the Palestinian leadership.

These Accords are one of the rare agreements in the history of occupations, where the fundamental issues did not get solved, and were left to a subsequent negotiating process. Usually, the first issues to be solved are related to the withdrawal of the occupation, independence, the right of self-determination, and sovereignty. However¬¬, the catastrophe of the Oslo Accords is that they were preoccupied with details and minor parts of the self-rule, while keeping major issues unsolved, such as: the future of Jerusalem, the future of refugees and the right of return, the future of Israeli settlements in WB and GS, the right of self-determination, the borders of the Palestinian state, and the exploitation of natural resources, especially water.

At the same time, the Accords forced the Palestinian side to stop all forms of armed resistance, solve all its problems and continue negotiations by peaceful means only. Thus, the Palestinian national project lost all its cards and any means of pressure that would make the occupation expensive and useless. As the Accords have put aside the referentiality of the United Nations and international resolutions, and did not contain any binding (international) mechanism to implement the Accords. For the Palestinian national project became dependent on the Israeli will and the American sponsor. And as the Arabic proverb says, “Whoever lets the wolf graze his sheep has done them wrong.”!!

As a result, the Israeli side has gained the prerogative of “endless” procrastination and postponement, and enjoyed “managing” the peace process, while it was establishing facts on the ground in order to solve the core issues at the end to its own benefit.

Third: Establishing the Bases of the Palestinian Schism

These Accords have paved the way for the largest schism in modern and contemporary Palestinian history, as its profound effects still stand. For a single Palestinian faction (Fatah movement) has solely made a fateful decision, which includes a historic concession to most of Palestine, and lays the ground for a peaceful settlement with the occupation. All of these decisions were made without referring to the Palestinian people, and without agreeing with the main national forces, and even while there were strong opposition from within Fatah itself!!

The resistance forces that refused the Accords formed the Alliance of the Ten Factions, which represented a strong popular and political bloc in the Palestinian arena. It continued the resistance path, while considering the PA practically an obstacle in the armed resistance way. As for Fatah and the PA, they considered “Oslo” the lifebuoy, and the roadmap for establishing the Palestinian state. Furthermore, and since they are committed to peaceful means, they considered the armed resistance a sabotage to the Palestinian dream of an independent state, and a hindrance that must be silenced and neutralized. Consequently, they suppressed the resistance and chased its members, and facilitated security coordination with Israel against them.

Since then, the flaws in priorities and tracks management and the fault line between pro-peace settlement and pro-resistance movements was established, and the schism of 2007—which led to the control of Hamas of GS and Fatah of WB—was only a manifestation of the original schism due to Oslo Accords.

Any agreements that are the bases for establishing a state and the withdrawal of the occupying forces, are supposed to include dismantling the Israeli settlements and the the withdrawal of settlers. However, the Oslo Accords neither did they impose such steps on the Israeli side, nor did they state that settlement building must stop. Consequently, Israel continued with its settlement building in a more intensive manner, and raced against time to confiscate as much land as it can, and confine the Palestinians within special “ghettos” and “Bantustans.” Israel has changed the face of Jerusalem, built the Separation Wall, its settlements reached around 200 and its settlement posts 220, while the number of settlers in WB increased from 280 thousand to 800 thousand in early 2019. Hence, the PA has found that the “two-state solution” has practically lost its meaning, and that its authority has been a “stupid” tool in the hands of Israel to silence opposing Palestinian, Arab and international voices, on the pretext that a peace process is on the move, and that it was a “naïve” tool used to pass the time in the interest of Israel, which was building facts on the ground and swallowing the WB.

The PA institutional structure was established according to a system that is “prepared for failure”!! That is, it didn’t have the least requirements necessary to succeed and develop to become an independent Palestinian state.

This authority suffered from the political and sovereign hegemony of the Israeli occupation, which controls the border, the PA entrances and exits, and the movement of individuals by land, sea and air, and which has tremendous ability to disrupt work and daily life, and to strike infrastructures.

The PA has established for an economic failure by signing the “Paris Protocol.” In short, a consumer client state was established, rot by corruption, and has no vision of the way to separate from the occupation. Almost 80% of its revenues are either from taxes (clearance revenues) collected by Israel, or from foreign aid and funding; and 85% of its imports come from Israel, while two-thirds of its exports goes to Israel. The exports and imports are governed by the Israeli will; and the Palestinian per capita income is less than one tenth of the Israeli one.

It is a security-fragile authority, where Israel moves around freely: it besieges, storms, arrests, imprisons and assassinates, and it prevents people from traveling or entering as it pleases. Moreover, Israel protects the assaulting settlers, provides cover to its agents and has around 600 fixed and mobile barriers in WB.

The PA is a functionally exhausted authority serving Israel through security coordination—which is still “sacred” to President Mahmud ‘Abbas—and security forces that consume a considerable amount of the PA’s budget; about seven times the global average of security budgets in other countries.

Finally, aren’t the Oslo Accords a “catastrophe” to the Palestinian people and their national project…Shouldn’t disconnecting and disengaging from them become an urgent national priority, to put the Palestinian house in order on new foundations.

Analysis: The Murder of the ‘Menacing’ Water Technician: On the Shadow Wars in the West Bank