‘This Will Affect Everyone’: Israel And Palestine Ramp Up Escalating Trade War 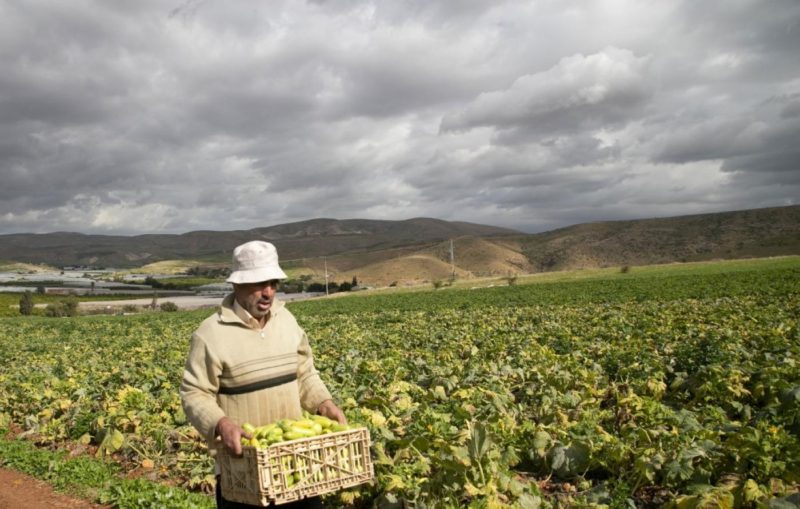 Palestinian farmers fearful for their future, as Israeli ban on agricultural imports leaves piles of fruit and vegetables unsold.

It has been five days since the last Israel-bound truck took away its container of produce from the Palestinian village of Tammoun, in the northeastern West Bank, and the crates of potatoes and onions are piling up.

It is an unusual sight for the transit area, which is the last stop between local farmers from Tammoun and the surrounding areas, and traders who export to Israel.

But ever since Israel halted the import of Palestinian produce last week, the site of piled up food has become an unfortunate reality.

‘Even though it’s affecting us negatively, I support the Palestinian government… At least they’re taking a stand’

“It’s been like this for days,” Noman Mutawi, 40, a truck driver told Middle East Eye. “Usually, containers like these get shipped out within hours, but now they’re just sitting here.”

The ripple effects of US President Donald Trump’s “deal of the century”, which was unveiled on 28 January, have been felt across the West Bank in the form of protests, an increased Israeli military presence, and a spike in attacks on Israelis and the killing of Palestinians.

A more silent conflict, however, is being waged in the form of a trade war between Israel and the Palestinian Authority (PA), which reached new heights last week.

In September, the PA banned Israeli cattle imports into the territory, with a spokesperson for the PA’s economy ministry stating it was part of a plan to reduce dependence on Israel and focus on economic relations with Arab states instead.

Citing the ban, and under increasing pressure from Israel’s cattle farmers, Israeli Defence Minister Naftali Bennett decided on 31 January to retaliate by banning the import of Palestinian agricultural goods into Israel.

Days later, the PA announced they would be banning the import of Israeli produce into the West Bank.

Mutawi expressed concern that keeping the produce for several days will leave it too old to send to market.

With no produce to sell, the factory Mutawi works for will likely suffer significant losses this month, and as a result, so will he.

“Myself and the other workers are already anticipating getting our salaries late this month,” he said, adding that even when he is paid on time, he is barely scraping by.

The Palestinian and Israeli economies, especially when it comes to agricultural imports and exports, are highly co-dependent.

According to the Palestinian Ministry of Agriculture, Palestinian agricultural exports to Israel last year amounted to around $88m, more than two-thirds of the West Bank’s overall exported produce.

It is estimated that PA imports from Israel are worth tens of billions of shekels a year, while Israel imports some 700 million shekels ($205m) worth of goods from the PA annually.

“We rely heavily on the traders who export to Israel,” Mutawi said, “but we haven’t seen them since Trump’s plan was released.”

Caught in the middle of the import bans are people like Mutawi, and the thousands of other Palestinians who work in the agricultural industry, which accounts for 22 percent of Palestinian GDP, and 42 percent of the economy of the Jordan Valley.

“We can’t sell our usual produce to Israel, the prices in the Palestinian market have dropped significantly, which is good for consumers but not for farmers and distributors,” Mutawi said.

Twenty-eight kilometres north of Tammoun, on the northeastern border of the West Bank in the village of Ein al-Bayda, farmer and distributor Ghassan Fuqha said that he and his fellow farmers have already started to see the effects in the form of plummeting sale prices.

Luckily, Fuqha said, the trade war is happening in the middle of winter, the low season for most local crops in the northern Jordan Valley.

Fuqha, who is also the head of the local council in Kardala, projects that farmers across the West Bank will suffer losses of around 30 percent this winter. If the trade war continues into the summer, that number could go up to 50 to 60 percent, he said.

“And with, you can say, 99 percent of the northern [Jordan] Valley being farmers or working in the agricultural industry, this will affect everyone,” he said, including consumers and their purchasing habits.

Since Bennett’s decision to halt Palestinian imports into Israel, Fuqha said all the five major commercial checkpoints between the West Bank and Israel have been shut down, with no trucks allowed in or out.

“The majority of our imports from Israel are fruits, more so than vegetables,” Fuqha said.

“Go to the markets, and you will see a significant reduction in the amount of non-local fruits like apples and kiwis, for example, that people are selling in their stores.

“So consumers are also going to feel the effects in a negative way, and lose access to some of the produce they usually have.”

Under the table deals

But in fruit and vegetable stores across the West Bank, the fruit scarcity that Fuqha spoke of has yet to materialise.

Middle East Eye stopped at a dozen fruit and vegetable stands and markets stretching from the Jordan Valley, all the way down to Bethlehem in the southern West Bank.

Every single shop was abundant with the usual Israeli fruit and vegetables, from apples to carrots, as well as garlic and herbs like cilantro.

Any signs of a crippling trade war were nowhere to be seen.

One shop owner in Bethlehem said, on condition of anonymity, that distributors were still finding ways to do under-the-table deals to get Israeli produce into the Palestinian territory, and vice versa.

“People are always going to find ways around such government decisions, in order to keep up with consumer demand, and so that we don’t get too badly hurt financially,” the shopkeeper said.

“Some people are not happy about it, but it’s the reality.”

Despite the tough road ahead, and the likelihood that many farmers and workers in the agricultural industry will suffer in one way or another as a result of the trade war, Mutawi and Fuqha both said they stand with the PA’s decision.

“Even though it’s affecting us negatively, I support the Palestinian government,” Mutawi said. “Look at what the Israelis are doing to our land and to our people. At least they’re taking a stand.”

Surrounded by a number of local farmers, Fuqha said: “I think I can speak for many of my fellow farmers when I say that, on the ground, we don’t care about economic losses if it comes at the expense of our political situation,” as the men nodded in agreement.

“Every country has the right to protect its market,” Fuqha said, referring to the PA’s decision to halt cattle and sheep imports from Israel, under the pretext that the government wanted to reduce its dependence on the Israeli market and economy.

Fuqha says he does not believe there is much pressure on the PA from Palestinian farmers to stop the trade war, in the way that Israeli farmers have been pressuring their government.

“There have been no demonstrations by Palestinian farmers demanding an end to the sanctions,” he said.

“We are with the government,” he added, emphasising again that he believed in economic sacrifice to achieve political gains.

“Maybe this is an opportunity for us to finally take control over our own market and economy.”

‘Who are they trying to fool?’

But Abu Durgham Bisharat, a farmer and distributor from Tammoun, disagreed.

“Take control of our market? Become less dependent on the Israeli economy?” Bisharat asked indignantly. “Who are they [the PA] trying to fool?”

“We are under occupation. It’s plain and simple,” he said, as he adjusted his kufiyah around his neck.

“We have no sovereignty over our affairs, no control over our borders, and cannot, no matter how hard we try, separate ourselves from the Israeli occupation.”

Bisharat pointed to Israel’s most recent block on Palestinian exports leaving via Jordan as the perfect example of why the PA, in his opinion, has made a huge mistake.

“The Israelis are going to suffocate us. They won’t let us export or import anything,” he said.

Before the PA “rashly” and “haphazardly” takes measures like the ones in recent weeks, Bisharat said they should focus on actually supporting the farmers who sustain the economy.

“They should be negotiating for more water for us, for us to have the right to farm on our land without interference from Israel,” he said, the frustration in his voice rising.

“Stop making us pay exorbitant taxes on our goods, give us insurance on our produce like the Israelis give their farmers.”

“If you can’t even support the basic rights of the farmers, then step aside. Don’t speak on our behalf!” Bisharat said, pointing out the fact that the majority of the PA’s funds go towards its security apparatus.

“Which security? We don’t have soldiers, planes, or an army. Is this security to protect us against the settlers? They don’t even do that.”

Meanwhile, he says, the agriculture ministry receives “less than one percent of the total funding from the PA”.

“They claim they are fighting for this land, but if you don’t protect your own farmers, the only thing you are protecting is the occupation.”

A BDS success or failure?

While Bisharat wholeheartedly stands against the PA’s trade sanctions, he emphasised that his disapproval did not stem from a concern about his potential financial losses.

“I support the boycott of Israeli goods as a tool to put political pressure on Israel,” Bisharat said, adding that such measures, however, should be “properly coordinated and taken up by the citizenry, not just as a unilateral move by a government that has no real power”.

“This is not a real trade ‘war’. It’s just a reactionary back and forth between the two,” Nawajaa stated.

“They [the PA] didn’t have a real strategy going into this; they just did it as a reaction to what the Israelis did. The difference is that the Israelis are the one with the actual power and control in this situation.”

While Nawajaa disagrees about the approach of the PA, he does see it as a positive sign for the BDS movement locally.

“People are starting to understand that BDS is one of the best tools we can use to fight this occupation,” he said.

“Part of this ‘war’ the PA is waging, should be coordinating with the citizens and civil society to enforce a nationwide boycott of everything Israeli – universities, arts, all food products, business relations etc.”

“All of that kind of pressure, when done in the right way, really could enact some change.”

Opinion/Analysis 02/11/20 Crisis and Opportunity: The ‘Deal of the Century’ Challenge for Palestinians