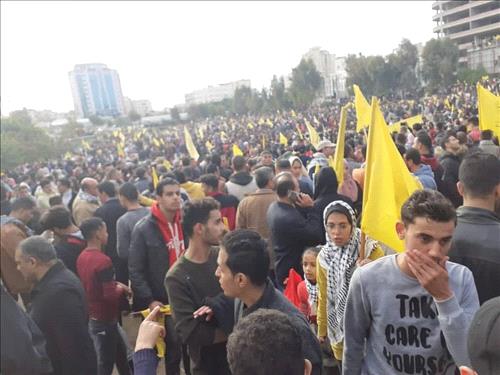 Thousands of people gathered at al-Wihdeh Street in downtown Gaza City, Wednesday afternoon, to celebrate the 55th anniversary of the launch of the Fateh movement, the Palestinian News and Info Agency (WAFA) reported.

WAFA correspondent said that Palestinians from all over the Hamas-controlled and Israeli-blockaded Gaza Strip, joined the rally in the center of Gaza City. People carried photos of President Mahmoud Abbas and the late President Yasser Arafat as well as the yellow Fateh banner.

President Abbas delivered to the crowds, a speech via video conference, in which he affirmed to the people of Gaza that they will always be on his mind and in his heart.

“The dangerous turning point of our national cause, as a result of the continuation of the aggressive Israeli policies and measures against our land and our people, demands from us to stand together, firm and strong, to protect our national project,” he stated.

He reiterated that “we will not accept holding elections without Jerusalem, and without the participation of our people,” stressing that “Jerusalem, with its Christian and Islamic holy places, is the capital of our eternal state, and it is the jewel of the crown, it is neither for sale nor for bargaining. For its sake, our people have sacrificed convoys of martyrs, prisoners, and wounded.”

The President added, “The world today has more faith in the justice of our cause and our legitimate right to liberation and independence. Here is the International Criminal Court taking a courageous decision to conduct a comprehensive investigation into the war crimes committed by the Israeli occupation against our people so that we can try this occupation for its crimes before international justice.”

He also asserted that “the issue of our prisoners, our wounded and our martyrs is a red line, and they are not up for bargaining or negotiation, whatever the price.”

The President added, “Our people in Gaza are an integral part of our Palestinian people, and dear to our hearts. They are an important part of our life and we are proud of that. What we see today in Gaza is our greatest pride that we will, God willing, reach the happy end, which is the establishment of our independent Palestinian state with its capital holy Jerusalem, by hook or by crook.”