Thousands March In Bethlehem In Solidarity With Hunger Striking Detainees 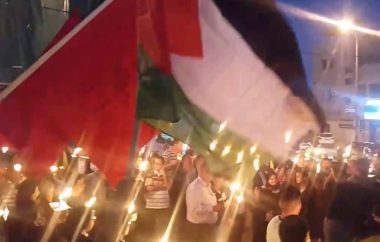 Thousands of Palestinians held, Friday, massive nonviolent processions in various parts of Bethlehem governorate, in the occupied West Bank, expressing their solidarity and support with the Palestinian detainees in Israeli prisons, ongoing with the hunger strike for the twelfth consecutive day.

In Beit Sahour city, hundreds of Palestinians held a candlelight procession, while chanting for the freedom of all detainees, and the liberation of Palestine.

They carried flags, posters of political prisoners and signs calling for extensive solidarity with the detainees, facing ongoing and escalating Israeli violations.

Local poet Nader Dakkarat, recited a poem he wrote and dedicated to the hunger striking Palestinian detainees, their steadfastness and determination to achieve their legitimate, internationally-guaranteed rights.

In Bethlehem city, hundreds of Palestinians, including representatives of various factions, unions and students blocks, marched towards the solidarity tent at the Manger Square and Al-Manara junction, while carrying flags, posters of the detainees and signs calling for immediate and unconditional release.

A similar protest was held in Teqoua town, southeast of Bethlehem, where hundreds of Palestinians marched in solidarity with the detainees and their just demands.

Day of Rage: Many Palestinians Injured as Clashes Erupt across Occupied West Bank