Israeli Soldiers Abduct A Wounded Child From An Ambulance In Jerusalem 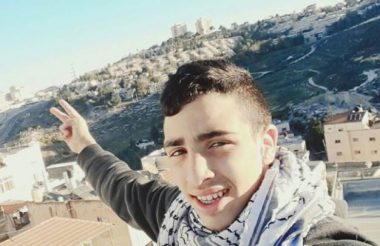 Israeli soldiers abducted, on Thursday evening, a Palestinian child who was shot by an army sharpshooter, in the al-‘Isawiyya town, in occupied East Jerusalem, after the soldiers chased an ambulance transporting him to the hospital.

The child, identified as Mos’ab Mahmoud Mheisin, 14, was shot by several live rounds in the lower extremities, including the groin.

One of his relatives, identified as Bashar Mheisin, said that Mo’ab was standing just a few meters away from his home, and he and his family were on their way to a social event, when clashes took place after the soldiers invaded al-‘Isawiyya, and clashed with local youths, who hurled stones at their vehicles.

After being shot with several live rounds, a Palestinian ambulance moved him to the al-Makassed hospital, in the at-Tour area, and the doctors later decided he needs further treatment at Shaare Tzedek Israeli medical center.

Mheisin stated that the soldiers, driving a civilian car, chased the Palestinian ambulance, before stopping it, and forced the driver to park it near Augusta Victoria hospital, not far from al-Makassed.

“Then they wrote down my ID number, my phone number, and asked me many questions, before two officers accompanied us in the ambulance that was ordered to head to Sha’are Tzedek Medical Center,” he said, “The civilian car that transported secret security officers, followed us all the way there.”

Mheisin added that the incident led to at least an hour delay in transferring the child, despite his serious injuries, and his urgent need to surgery.

The child’s family managed to stay with him until midnight, but the guards forced them to leave, after
questioning him and his uncle Bashar.

On Friday, an Israeli ambulance took the wounded child to the District Court in occupied Jerusalem, where a judge ordered him under interrogation at the Police station in Salaheddin Street area.

Mohammad Abu al-Hummus, a member of the Follow-Up Committee in al-‘Isawiyya, said the soldiers frequently invade the town, and fire live rounds, rubber-coated steel bullets, gas bombs and concussion grenades, in addition to occupying rooftops to use them as firing posts during clashes.

He added that the wounded child was shot by one of the army sharpshooters, who occupied a rooftop of a residential building, one of many that were utilized by the soldiers as firing posts and monitoring towers.

Abu al-Hummus further said that the soldiers deliberately conduct provocative acts during their invasions, and resort to violent searches of homes and property, in addition to harassing the Palestinians and preventing them from even standing in front of their own homes, or on their balconies.