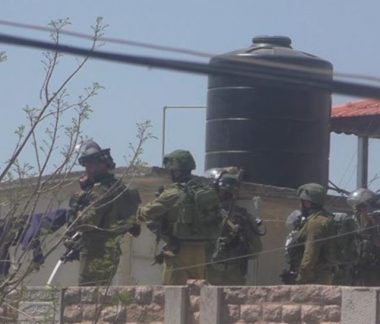 Israeli soldiers invaded, on Friday afternoon, Beit Ummar town, north of the southern West Bank city of Hebron, and attacked protests held in solidarity with the hunger striking detainees, leading to clashes with local youths, wounding at least nine with, including two with Toto expanding bullets, and causing many to suffer the effects of teargas inhalation.

Media sources in Hebron said hundreds of Palestinians marched in the center of the town, following Friday noon prayers, before the soldiers invaded it from several directions and opened fire on them.
The incident led to clashes between the invading soldiers and local youngsters, who hurled stones and empty bottles on the military vehicles.

The soldiers fired dozens of live rounds, including the Toto expanding bullets, moderately wounding two young men in the legs, and one who suffered a chest injury after being stuck by fragments of an expanding bullet.

The medics also provided the needed treatment to six Palestinians, who were shot with rubber-coated steel bullets, and dozens who suffered the effects of teargas inhalation.

It is worth mentioning that the soldiers also sprayed many homes with wastewater mixed with chemicals, occupied some rooftops, and withdrew from the town approximately two hours after invading it.

In related news, undercover soldiers of the Israeli army infiltrated, Friday, an area close to the Hebron Governmental Hospital, in the southern West Bank city of Hebron, and abducted five young Palestinian men.

|Day of Rage: Many Palestinians Injured as Clashes Erupt across Occupied West Bank|