Many Palestinians Injured as Clashes Erupt across Occupied West Bank 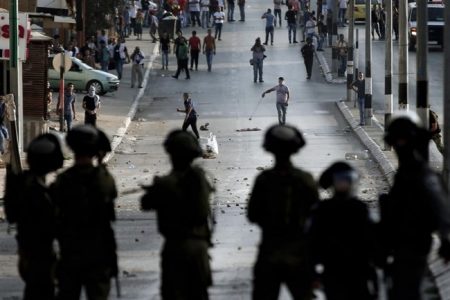 Ongoing clashes have erupted across the occupied West Bank on Friday, with several Palestinians injured fin support of hunger-striking Palestinian prisoners who entered the 12th day of a mass hunger strike on Friday.

Israeli forces fired tear-gas bombs, rubber-coated steel bullets and live fire, during the clashes, which have erupted following Friday prayers in cities, villages and refugee camps in various districts of the West Bank.

The Israeli army said that some 2,000 Palestinians participated in “violent riots in several locations throughout the day,” adding that Israeli forces had responded to the “riots” with “crowd control means.”

This is a developing story.

Several Palestinian youth were injured while dozens of others suffered from severe tear-gas inhalation during clashes across the Ramallah and al-Bireh district.

A march set off from the Nabi Saleh village, in northwestern Ramallah, in solidarity with hunger-striking Palestinians. Israeli forces opened live fire and tear gas cannisters on the protesters, injuring three Palestinians.

Locals in Nabi Saleh told Ma’an News Agency that Israeli forces were firing the once-banned “tutu” ammunition on protesters, which explode once they come in contact with the body.

Sources from the Palestinian Red Crescent said that one youth was injured in the head with a tear gas cannister while two others were injured in the legs with tutu bullets.

The identity and conditions of the injured Palestinians remained unknown.

An Israeli army spokesperson said that they would look into reports of the use of tutu ammunition.

Meanwhile, dozens of Palestinians suffered from severe tear-gas inhalation during clashes that erupted between Palestinian youth and Israeli soldiers near Ofer prison, in western Ramallah, and at the northern entrance of Silwad, in eastern Ramallah. Witnesses said that three Palestinians were injured with rubber-coated metal bullets.

In Silwad, a Palestinian was injured with live fire in the leg, while tens of others suffered from tear gas inhalation, as Israeli forces fired live bullets, rubber bullets, sound bombs, and tear gas canisters, after violent clashes broke out in the area.

In the Sinjil village of northern Ramallah, Palestinian youth threw rocks at Israeli settler vehicles passing by the main road near the village, causing damages to the vehicles, while Israeli soldiers closed all roads leading to the village and set up checkpoints at the main road adjacent to the village which connects the Nablus and Ramallah districts.

Israeli soldiers also fired tear-gas bombs and stun grenades at young protesters, as forces closed the checkpoint and prevented all pedestrians and vehicles from passing.

In the village of Bilin, the weekly march was launched from the village and headed towards Israel’s separation wall, with the participation of Palestinians and foreign activists.

Palestinian protesters threw rocks at Israeli forces, during the march, and set fire to rubber tires at the separation wall’s gate.

Clashes erupted at the Beita crossroads south of Nablus city in the northern West Bank following Friday prayers, in which hundreds of Palestinian worshipers took part in solidarity with hunger-striking prisoners.

More than ten Palestinians suffered from severe tear-gas inhalation while one youth was injured with a rubber-coated steel bullet, according to witnesses.

Among those who suffered tear-gas inhalation was a father of three prisoners, Hajj Ihsan Adili Abu Waddah. Secretary of the Fateh movement in Nablus Jihad Ramadan was injured with a stun grenade in the leg.

The Palestinian Red Crescent said, in a statement, that 20 Palestinians suffered from tear gas inhalation.

Several trees in the village caught on fire from tear-gas bombs and stun grenades fired by Israeli soldiers.

The Palestinian Red Crescent said, in a statement, that 10 Palestinians suffered from tear gas inhalation during the clashes.

In the Awarta village in southern Nablus, dozens of Palestinians took part in Friday prayers near the Huwwara Israeli military base.

In the New Askar area of Nablus, adjacent to the Askar refugee camp, one Palestinian suffered tear gas inhalation during clashes, according to the Palestinian Red Crescent.

Israeli forces opened fire on a solidarity sit-in tent in the al-Arrub refugee camp of northern Hebron, causing clashes to erupt between locals and the armed forces.

In the village of Beit Ummar in the north of Hebron, Israeli forces injured two Palestinians with live bullets and another with rubber-coated bullets after clashes broke out amid a solidarity march in the village. Five Palestinians also suffered from tear gas inhalation, according to the Palestinian Red Crescent.

However, witnesses said that six Palestinians had been injured with rubber-coated bullets, one was injured with shrapnel from a live bullet in the chest, and two were injured with tutu bullets in their legs and were transferred to the Hebron governmental hospital.

The solidarity march was launched in the village following Friday prayers and headed to the entrance of the village where Israeli forces had stationed themselves.

According to witnesses, Israeli soldiers took over the roof tops of 10 Palestinian homes in the village and turned them into temporary military posts, where the witnesses said the soldiers shot tutu bullets, rubber-coated bullets, and live ammunition at Palestinians.

Israeli forces also sprayed waste water at Palestinians before retreating from the village two hours after the clashes broke out, witnesses said.

Meanwhile, Israeli forces dressed up as Palestinian civilians and detained five Palestinians while assaulting them near the Hebron governmental hospital during clashes that erupted in the area around the hospital, according to witnesses.

Witnesses said that clashes had erupted from Bam al-Zawiya area and reached the area of the Hebron governmental hospital.

Israeli soldiers also fired a sound bomb at the hospital, causing the front glass door of the emergency section to shatter, witnesses added.

In southern Qalqilia city, located in the northern West Bank, clashes broke out near an Israeli military checkpoint. The Palestinian Red Crescent reported that two Palestinians suffered from tear gas inhalation near the checkpoint.