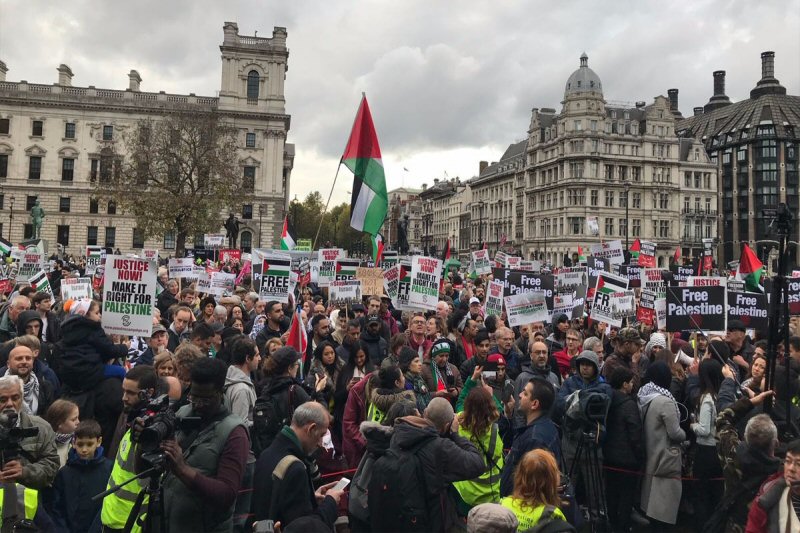 Thousands of pro-Palestinians marched through the streets of London on Saturday, to protest the centenary celebration of the Balfour Declaration that helped Jews to establish a national state in Palestine.

The protest came with the Israeli Prime Minister Benjamin Netanyahu visiting the UK to celebrate the 100th anniversary of then-foreign UK secretary Arthur Balfour’s promise of London’s support in the establishment of a Jewish homeland, at the expense of the Palestinians in Palestine.

According to Days of Palestine, several people in the crowd called for liberating the historic Palestinians as they chanted: “From the river to the sea, Palestine will be free.”

British Prime Minister Theresa May has said the UK was “proud” of its role in the creation of the Israeli occupation state, which has been inflicting oppression and suffering on Palestinians since before its creation.

May said it was a “great pleasure” to host Netanyahu at 10 Downing Street, to commemorate the Balfour Declaration.

“The United Kingdom is proud of the role that we played in the establishment of the State of Israel and we are approaching this commemoration with respect and honour,” she said.

Addressing the protesters, Corbyn said: “Let’s mark the Belfour Declaration by recognizing Palestine… We must increase the international pressure for the end of the Israeli occupation of Palestinian territories, illegal settlement expansion and of course the blockade of Gaza.”