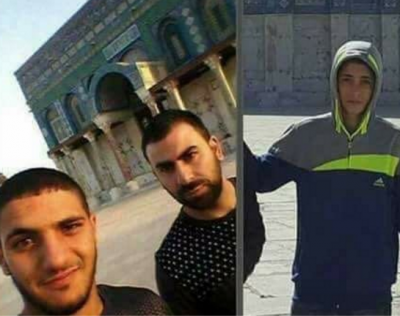 It is worth mentioning that the Israeli police also abducted the general mufti of Jerusalem, the Imam of Al-Aqsa Mosque, Sheikh Mohammad Hussein, after preventing him from entering the mosque, and after assaulting him near the Tribes Gate.

The soldiers also invaded Bab Hatta neighborhood, next to Al-Aqsa, and attacked many Palestinians, leading to clashes.

Israeli police officers and soldiers shot and killed, on Friday morning, three young Palestinian men, who opened fire on officers near the “Tribes Gate,” leading to the Al-Aqsa Mosque, in occupied East Jerusalem, and fled towards the courtyards of Al-Aqsa Mosque, where they exchanged fire with soldiers, wounding three, before they were killed.

Following the fatal incidents, the soldiers completely sealed Al-Aqsa Mosque, and canceled Friday prayers, before preventing all Muslim worshipers from entering or leaving the mosque courtyards.

Israeli daily Haaretz said three officers were hurt in the shooting; two of them suffered serious wounds and one suffered a mild-to-moderate injury. Haaretz quoted the Israeli police stating that the three Palestinians arrived at one of Al-Aqsa gates, and noticed police and military presence, before they opened fire on them and escaped.

It stated that the police pursued the three, and killed them, and added that the officers found two rifles and a pistol on the bodies of the three Palestinians.

After the shooting, the police closed the entire compound of Al-Aqsa Mosque, and initiated extensive searches in the area “to ensure no weapons are in it.”

Although no faction has claimed responsibility for the shooting, Hamas spokesperson in Gaza, Sami Abu Zohri, said the incident is a natural reaction and outcome of “Israel’s ongoing terror, and desecration of the Al-Aqsa Mosque.”

Is worth mentioning that the soldiers prevented the Mufti of Jerusalem, the Khatib of Al-Aqsa Mosque, and several other religious leaders, including the head of the Jerusalem Waqf and Endowment Department, from entering the mosque or its compound.