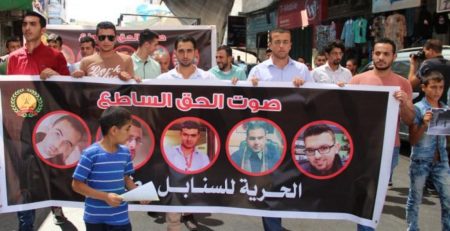 The three were seized along with Ahmed Samih Darwish, 24, and Hamed Khaled Namoura, 25, from the headquarters of Radio Sanabel in al-Khalil in a violent raid on the station on 31 August 2016. The station’s equipment was confiscated and it was closed by military order for three months. All five of the journalists from Sanabel are from the town of Dura in al-Khalil.

The five journalists were accused of “incitement” for broadcasting songs, interviews and programs about the Palestinian uprising, resistance, Palestinians killed by the Israeli occupation and supporting Palestinians revolting against occupation. Omran was also the correspondent of Asra Voice radio within Sanabel, focusing on the struggles of Palestinian prisoners.

Darwish and Namoura continue to face a military court. The five are among dozens of Palestinian journalists held in Israeli prison for their activities in reporting on and amplifying the voices of Palestinians in resistance to occupation.