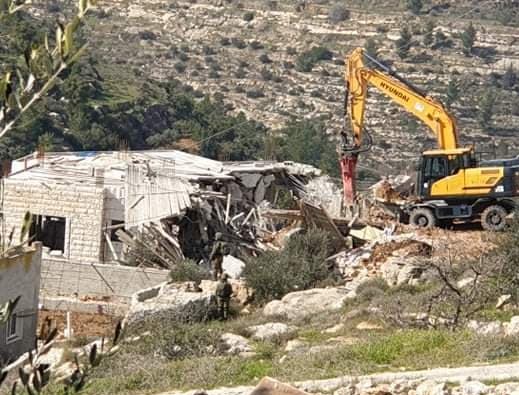 Many Palestinians, on Monday were shot and wounded by rubber-coated steel bullets, others suffered inhalation injuries, and one teenager was detained after Israeli troops invaded al-Walaja town, 4 kilometers northwest of Bethlehem, to demolish a Palestinian-owned home.

The army stormed the central occupied West Bank village, surrounded the under-construction home, and knocked down the home based on the pretext of lacking an Israeli issued building permit.

Several Palestinian residents gathered in the area to protest the destruction of the home, according to local sources. Soldiers reacted by opening fire at the unarmed civilians with rubber-coated steel rounds and teargas canisters.

As a result, many Palestinian civilians were shot and injured with rubber-coated steel bullets, while others suffered the effects of teargas inhalation.

Sources added that Israeli forces detained a local Palestinian teenager, identified as Nabiel Ali, and took him to an unknown location when they retreated from the village.