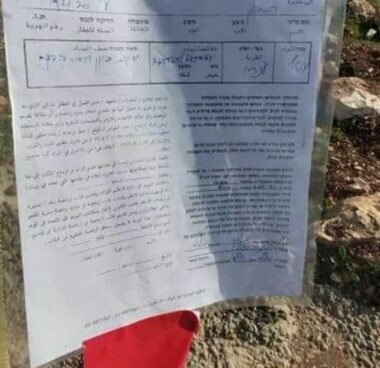 Ahmad Salah, a local nonviolent activist against the Israeli occupation and its colonies, said the soldiers handed Ibrahim Suleiman a demolition order targeting his shack which he uses to store his harvest and agricultural tools.

Salah added that the army is alleging the shack, although on land privately owned by Salah, was not licensed by the “Civil Administration Office,” the administrative branch of Israel’s illegal occupation.

The soldiers also handed a demolition order targeting a well, used by the farmers to irrigate their crops and farmlands.

The structures and the well are in Area C of the occupied West Bank, about %60 o the occupied territory, under full Israeli control.

The lands are under the constant threat of illegal annexation, and the structures on them face repeated demolitions and other violations under the pretext of lacking a permit issued by the Israeli occupation authorities, even if they are licensed by the local town councils.

On Monday, the soldiers abducted two Palestinians from Hebron, including one who was taken prisoner near Nablus, in the occupied West Bank.

The soldiers also abducted eight Palestinians from the West Bank governorates of Ramallah and Bethlehem.

On Sunday evening, the soldiers detained four children in Beit Ijza village, northwest of occupied Jerusalem, and interrogated them for several hours.