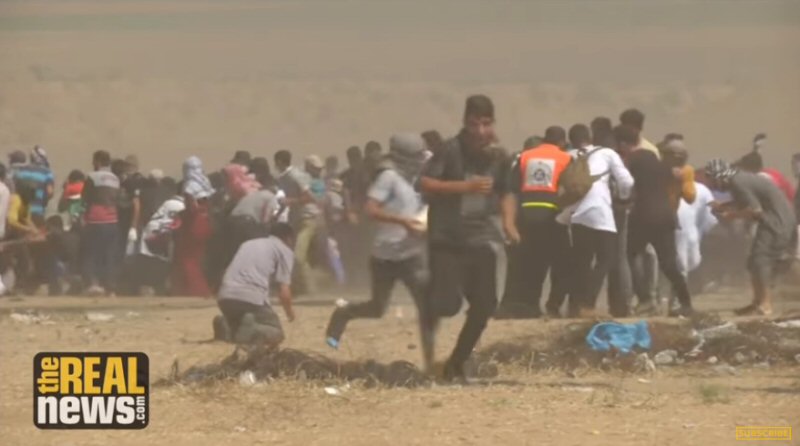 Through violence, coercion, and bribery, Israel, the U.S., U.A.E., and Saudi Arabia want Palestinians to give up their rights under international law, and accept limited sovereignty in a weak, divided territory. But, growing non-violent resistance in the Occupied Territories and solidarity efforts around the world — such as a new settlement boycott in Ireland — make Palestinian surrender a pipe dream, says Rami Khouri.

AARON MATE: It’s The Real News. I’m Aaron Mate. This is Part 2 with Rami Khouri. He is a syndicated columnist, professor of journalism at the American University of Beirut, and Nonresident Senior Fellow at Harvard Kennedy School.

Rami, so in Part 1 we spoke about this growing alliance between Israel, Saudi Arabia, the UAE and the Trump administration trying to put pressure on Iran. Let’s speak now about how this dynamic fits into the issue of the Palestinians, with Israel growing closer to the Gulf monarchies. We’re speaking today on the hundredth day of the Great March of Return in Gaza, where Palestinians have gone out every week in these nonviolent protests, have been gunned down en masse by Israeli forces. And this coincides with reports that the UAE and Saudi Arabia and Israel have been teaming up to put pressure on the Palestinians. There have been reports of proposals, including Egypt being pressured to take on Gaza residents as citizens; also of the Gulf monarchies funding massive humanitarian projects in Gaza as a way to sort of try to convince Palestinians to give up on Hamas, and also pressure the Palestinian Authority in the West Bank. Your sense of how all these players now, what their designs are when it comes to Palestine?

RAMI KHOURI: From the Israeli perspective the designs haven’t changed since 1947-1948 when Israel was created, and the, the current Arab-Israeli conflict took its shape. The Israelis don’t want to accept that there’s any right that the Palestinian people have to end their refugeehood, to regain a place or properties inside what became Israel, and to have a political resolution that gives them a Palestinian state inside parts of Palestine, mainly the West Bank and Gaza. The Israelis want this to be resolved outside of Palestine. They want it to be a humanitarian issue. They want other people to pay for it, and they want somebody else to accommodate the Palestinians.

None of this is going to happen. The Palestinians in 1947-1948 who were thrown out or fled during the war that created Israel were about 750000 people. They’re about 9 million now. It’s, it’s astounding that any Israeli or Zionist or Christian Zionist, friend of Israel, could think that the Palestinians are just going to disappear and go and live in Sinai, or that everybody else is going to pay for it. The second point is the Arab Gulf monarchies like the Saudis, the Emiratis, and others who are trying to help come up with a deal and get closer to the state of Israel, they should realize that a poll was just released three days ago in the Arab world, done by a very respectable research institute, which is done every year across the region, showing that overwhelming majorities of Arab citizens don’t want to normalize ties with Israel until there is a reasonable resolution to the Palestine-Israel conflict.

So the Gulf leaders are pursuing policies that are woefully out of line with their own people’s desires. The Americans, for their part, with Jared Kushner, who I call junior moron, are coming up with this really moronic idea that you can build a gas plant, electric plant and a water desalination plant in Sinai, and that will essentially solve the Arab-Israeli conflict. It’s just fantasy thinking. It’s illusions, delusions. They’re trying to, everybody, the Emiratis, the Saudis, the Israelis, the American government, at least; not the American people. The American people are much more reasonable, as we know from polling and other evidence. They want an even-handed resolution.

But the governments are trying to come up with any kind of deal that would make it look like the Arab-Israeli conflict has been resolved. And there is no deal that excludes the two key elements: the resolution of the Palestinian refugee issue, and the creation of a Palestinian state and territories that would be negotiated. And in return, the Arabs are recognizing the state of Israel in its 1967 borders and living peacefully with it. There is no other resolution other than that. If that is not achievable by Jared Kushner and his group of negotiators, who are all supporters of Israeli settlements, donors, funders of Israeli settlements; they’re very right-wing pro-Zionist hawks. And they’re the negotiating team that’s supposed to do this.

I mean, it’s not just ineffective and delusional, but it’s an insult. Not just to the Arab people and the Palestinians. It’s an insult to the American people that the American government would put this kind of negotiating team to come up with this kind of moronic idea, and then expect the world to actually buy into this fantasy. So it’s just beyond comprehension. But this is the world of Donald Trump. And the right-wing, pro-Zionist zealots, and the Christian Zionist zealots, and the donors in Las Vegas and other places who support these kinds of positions, they live in this delusional world where they think because they’re powerful, because they have money, because they can kill people, that they can get their way. But that is not how the world works. And the Israelis, the Jewish people and the Israeli government, should be the first to understand this, because they gave the world the most dramatic example of how a group of people who believe that they have certain rights will keep working for those rights for thousands of years if they need to. And they succeeded, and they got a state of Israel, but they threw out the Palestinians to do it.

So that’s really what this is all about. It’s delusions on one side. And on the Palestinian side it’s a persistence to keep exploring a political resolution that can be negotiated based on international law and U.N. resolutions. But at the same time, keep resisting peacefully for the most part; and some people like Hamas uses military force. Military force is not going to solve this conflict for either side.

AARON MATE: In terms of the world response, do you see any pushback at all right now from the international community? I’m thinking of this week, we had on Monday Israel tightening its already medieval blockade of the Gaza Strip, closing off the only commercial crossing; so banning even more goods, and also exports, on top of the massive amounts of goods that it already bans. World reaction was very muted. The U.N. gave a sort of a tepid response, a tepid critique. Almost no coverage here in the U.S. Media reports like the New York Times framed it, as I believe, the headline was something like “Unable to stop flaming kites, Israel chokes off Gaza commerce,” so, framing that act by Israel as a response to these kites that have been lit on fire and flown over into Israel from Gaza. Do you see any pushback? Anything that could stop Israel and the U.S. and its partners from pursuing this, this collective punishment, this besiegement of Palestinians in an effort to get them to submit?

RAMI KHOURI: There’s nothing on the horizon except one possible thing, which is a growing movement around the world; a peaceful, nonviolent political movement to frame the Israeli occupation of Palestine and treatment of occupation of the West Bank Gaza and East Jerusalem in ’67 and treat all Palestinians, including Palestinians who are citizens of the state of Israel, as well as the refugees outside and the people who are occupied, treating them in the way that white South Africa treated the blacks and the coloureds during apartheid. The growing movement of Boycott, Divestment, and Sanctions against Israel is gaining ground. The Irish Parliament, the Upper House voted last week to not accept any products that come out of Israeli settlements.

In other words, there’s a differentiation going on in mainstream American churches, Presbyterian churches and others, and labor unions, and schools, universities. There’s a growing movement, slowly, slowly in the world to tell the Israelis we support Israel as a state, in its 1967 borders. Absolutely, irrevocably we support and will defend Israel. But we absolutely and irrevocably reject the colonial apartheid-like policies of Israel and the occupied territories. That is growing, and this scares the daylights out of the Israelis, which it should, because if you become synonymous, if Israel becomes synonymous with apartheid, that’s bad news for Israel.

AARON MATE: Rami Khouri, syndicated columnist, professor of journalism at American University of Beirut and non-resident senior fellow at the Harvard Kennedy School. Thanks very much.

RAMI KHOURI: Thanks for having me.